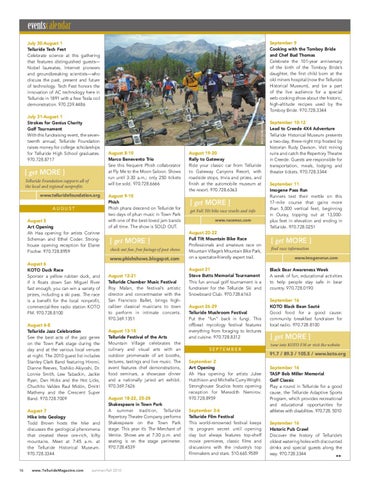 eventscalendar September 9 Cooking with the Tomboy Bride and Chef Bud Thomas Celebrate the 101-year anniversary of the birth of the Tomboy Bride’s daughter, the first child born at the old miners hospital (now the Telluride Historical Museum), and be a part of the live audience for a special web cooking show about the historic, high-altitude recipes used by the Tomboy Bride. 970.728.3344

August 8-10 Marco Benevento Trio See this frequent Phish collaborator at Fly Me to the Moon Saloon. Shows run until 3:30 a.m.; only 250 tickets will be sold. 970.728.6666 August 9-10 Phish Phish phans descend on Telluride for two days of phun music in Town Park with one of the best-loved jam bands of all time. The show is SOLD OUT.

[ get more ] check out fun, free footage of past shows

August 19-20 Rally to Gateway Ride your classic car from Telluride to Gateway Canyons Resort, with roadside stops, trivia and prizes, and finish at the automobile museum at the resort. 970.728.6363

[ get more ] tune into KOTO FM or visit the website

91.7 / 89.3 / 105.5 / www.koto.org September 16 TASP Bob Miller Memorial Golf Classic Play a round in Telluride for a good cause, the Telluride Adaptive Sports Program, which provides recreational and educational opportunities for athletes with disabilities. 970.728. 5010 September 16 Historic Pub Crawl Discover the history of Telluride’s oldest watering holes with discounted drinks and special guests along the way. 970.728.3344 ▶▶