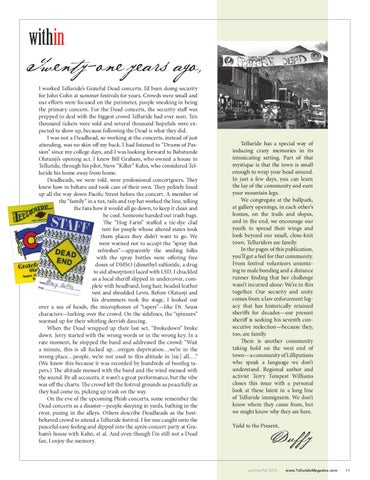 I worked Telluride’s Grateful Dead concerts. I’d been doing security for John Cohn at summer festivals for years. Crowds were small and our efforts were focused on the perimeter, people sneaking in being the primary concern. For the Dead concerts, the security staff was prepped to deal with the biggest crowd Telluride had ever seen. Ten thousand tickets were sold and several thousand hopefuls were expected to show up, because following the Dead is what they did. I was not a Deadhead, so working at the concerts, instead of just attending, was no skin off my back. I had listened to “Drums of Passion” since my college days, and I was looking forward to Babatunde Olatunji’s opening act. I knew Bill Graham, who owned a house in Telluride, through his pilot, Steve “Killer” Kahn, who considered Telluride his home away from home. Deadheads, we were told, were professional concertgoers. They knew how to behave and took care of their own. They politely lined up all the way down Pacific Street before the concert. A member of the “family” in a tux, tails and top hat worked the line, telling the fans how it would all go down, to keep it clean and be cool. Someone handed out trash bags. The “Hog Farm” staffed a tie-dye clad tent for people whose altered states took them places they didn’t want to go. We were warned not to accept the “spray that refreshes”—apparently the smiling folks with the spray bottles were offering free doses of DMSO (dimethyl sulfoxide, a drug to aid absorption) laced with LSD. I chuckled as a local sheriff slipped in undercover, complete with headband, long hair, beaded leather vest and shredded Levis. Before Olatunji and his drummers took the stage, I looked out over a sea of heads, the microphones of “tapers”­—like Dr. Seuss characters—lurking over the crowd. On the sidelines, the “spinners” warmed up for their whirling dervish dancing. When the Dead wrapped up their last set, “Brokedown” broke down. Jerry started with the wrong words or in the wrong key. In a rare moment, he stopped the band and addressed the crowd: “Wait a minute, this is all fucked up…oxygen deprivation…we’re in the wrong place…people, we’re not used to this altitude in [sic] all….” (We know this because it was recorded by hundreds of bootleg tapers.) The altitude messed with the band and the wind messed with the sound. By all accounts, it wasn’t a great performance, but the vibe was off the charts. The crowd left the festival grounds as peacefully as they had come in, picking up trash on the way. On the eve of the upcoming Phish concerts, some remember the Dead concerts as a disaster—people sleeping in yards, bathing in the river, peeing in the alleys. Others describe Deadheads as the bestbehaved crowd to attend a Telluride festival. I for one caught onto the peaceful easy feeling and dipped into the après-concert party at Graham’s house with Kahn, et al. And even though I’m still not a Dead fan, I enjoy the memory.

Telluride has a special way of inducing crazy memories in its intoxicating setting. Part of that mystique is that the town is small enough to wrap your head around. In just a few days, you can learn the lay of the community and earn your mountain legs. We congregate at the ballpark, at gallery openings, in each other’s homes, on the trails and slopes, and in the end, we encourage our youth to spread their wings and look beyond our small, close-knit town. Telluriders are family. In the pages of this publication, you’ll get a feel for that community. From festival volunteers unionizing to male bonding and a distance runner finding that her challenge wasn’t incurred alone: We’re in this together. Our security and unity comes from a law enforcement legacy that has historically retained sheriffs for decades—our present sheriff is seeking his seventh consecutive reelection—because they, too, are family. There is another community taking hold on the west end of town—a community of Lilliputians who speak a language we don’t understand. Regional author and activist Terry Tempest Williams closes this issue with a personal look at these latest in a long line of Telluride immigrants. We don’t know where they came from, but we might know why they are here. Yield to the Present,