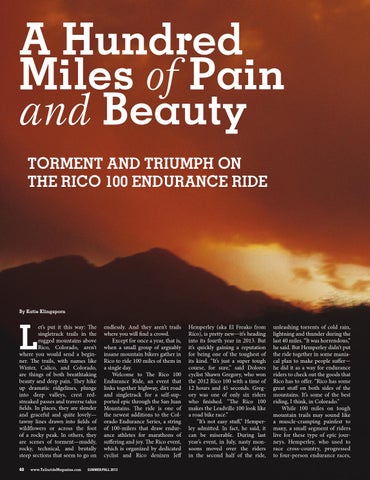 et’s put it this way: The singletrack trails in the rugged mountains above Rico, Colorado, aren’t where you would send a beginner. The trails, with names like Winter, Calico, and Colorado, are things of both breathtaking beauty and deep pain. They hike up dramatic ridgelines, plunge into deep valleys, crest redstreaked passes and traverse talus fields. In places, they are slender and graceful and quite lovely— tawny lines drawn into fields of wildflowers or across the foot of a rocky peak. In others, they are scenes of torment—muddy, rocky, technical, and brutally steep sections that seem to go on

endlessly. And they aren’t trails where you will find a crowd. Except for once a year, that is, when a small group of arguably insane mountain bikers gather in Rico to ride 100 miles of them in a single day. Welcome to The Rico 100 Endurance Ride, an event that links together highway, dirt road and singletrack for a self-supported epic through the San Juan Mountains. The ride is one of the newest additions to the Colorado Endurance Series, a string of 100-milers that draw endurance athletes for marathons of suffering and joy. The Rico event, which is organized by dedicated cyclist and Rico denizen Jeff

Hemperley (aka El Freako from Rico), is pretty new—it’s heading into its fourth year in 2013. But it’s quickly gaining a reputation for being one of the toughest of its kind. “It’s just a super tough course, for sure,” said Dolores cyclist Shawn Gregory, who won the 2012 Rico 100 with a time of 12 hours and 45 seconds. Gregory was one of only six riders who finished. “The Rico 100 makes the Leadville 100 look like a road bike race.” “It’s not easy stuff,” Hemperley admitted. In fact, he said, it can be miserable. During last year’s event, in July, nasty monsoons moved over the riders in the second half of the ride,

unleashing torrents of cold rain, lightning and thunder during the last 40 miles. “It was horrendous,” he said. But Hemperley didn’t put the ride together in some maniacal plan to make people suffer— he did it as a way for endurance riders to check out the goods that Rico has to offer. “Rico has some great stuff on both sides of the mountains. It’s some of the best riding, I think, in Colorado.” While 100 miles on tough mountain trails may sound like a muscle-cramping painfest to many, a small segment of riders live for these type of epic journeys. Hemperley, who used to race cross-country, progressed to four-person endurance races,