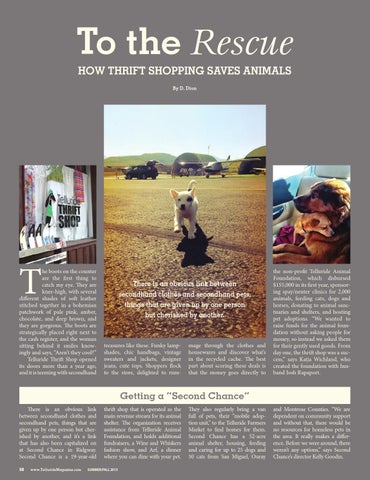 To the Rescue How Thrift Shopping Saves Animals By D. Dion

he boots on the counter are the first thing to catch my eye. They are knee-high, with several different shades of soft leather stitched together in a bohemian patchwork of pale pink, amber, chocolate, and deep brown, and they are gorgeous. The boots are strategically placed right next to the cash register, and the woman sitting behind it smiles knowingly and says, “Aren’t they cool?” Telluride Thrift Shop opened its doors more than a year ago, and it is teeming with secondhand

There is an obvious link between secondhand clothes and secondhand pets, things that are given up by one person but cherished by another.

mage through the clothes and housewares and discover what’s in the recycled cache. The best part about scoring these deals is that the money goes directly to

the non-profit Telluride Animal Foundation, which disbursed $155,000 in its first year, sponsoring spay/neuter clinics for 2,000 animals, feeding cats, dogs and horses, donating to animal sanctuaries and shelters, and hosting pet adoptions. “We wanted to raise funds for the animal foundation without asking people for money, so instead we asked them for their gently used goods. From day one, the thrift shop was a success,” says Katja Wichland, who created the foundation with husband Josh Rapaport.

Getting a “Second Chance” There is an obvious link between secondhand clothes and secondhand pets, things that are given up by one person but cherished by another, and it’s a link that has also been capitalized on at Second Chance in Ridgway. Second Chance is a 19-year-old 38

thrift shop that is operated as the main revenue stream for its animal shelter. The organization receives assistance from Telluride Animal Foundation, and holds additional fundraisers, a Wine and Whiskers fashion show, and Arf, a dinner where you can dine with your pet.

They also regularly bring a van full of pets, their “mobile adoption unit,” to the Telluride Farmers Market to find homes for them. Second Chance has a 52-acre animal shelter, housing, feeding and caring for up to 25 dogs and 50 cats from San Miguel, Ouray

and Montrose Counties. “We are dependent on community support and without that, there would be no resources for homeless pets in the area. It really makes a difference. Before we were around, there weren’t any options,” says Second Chance’s director Kelly Goodin.