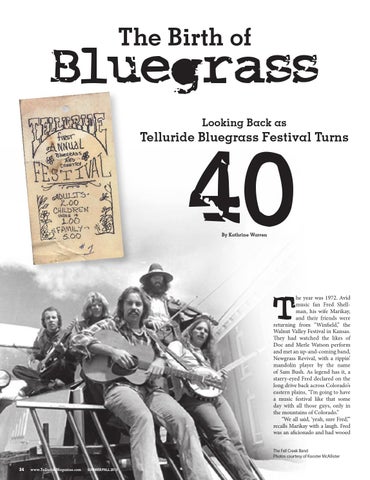 Bluegrass Looking Back as

he year was 1972. Avid music fan Fred Shellman, his wife Marikay, and their friends were returning from “Winfield,” the Walnut Valley Festival in Kansas. They had watched the likes of Doc and Merle Watson perform and met an up-and-coming band, Newgrass Revival, with a rippin’ mandolin player by the name of Sam Bush. As legend has it, a starry-eyed Fred declared on the long drive back across Colorado’s eastern plains, “I’m going to have a music festival like that some day with all those guys, only in the mountains of Colorado.” “We all said, ‘yeah, sure Fred,’” recalls Marikay with a laugh. Fred was an aficionado and had wooed