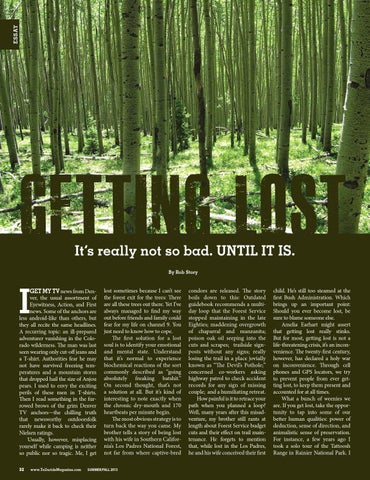 GET MY TV news from Denver, the usual assortment of Eyewitness, Action, and First news. Some of the anchors are less android-like than others, but they all recite the same headlines. A recurring topic: an ill-prepared adventurer vanishing in the Colorado wilderness. The man was last seen wearing only cut-off jeans and a T-shirt. Authorities fear he may not have survived freezing temperatures and a mountain storm that dropped hail the size of Anjou pears. I used to envy the exciting perils of these men in T-shirts. Then I read something in the furrowed brows of the grim Denver TV anchors—the chilling truth that newsworthy outdoorsfolk rarely make it back to check their Nielsen ratings. Usually, however, misplacing yourself while camping is neither so public nor so tragic. Me, I get 32

lost sometimes because I can’t see the forest exit for the trees: There are all these trees out there. Yet I’ve always managed to find my way out before friends and family could fear for my life on channel 9. You just need to know how to cope. The first solution for a lost soul is to identify your emotional and mental state. Understand that it’s normal to experience biochemical reactions of the sort commonly described as “going absolutely freaking batshit.” On second thought, that’s not a solution at all. But it’s kind of interesting to note exactly when the chronic dry-mouth and 170 heartbeats per minute begin. The most obvious strategy is to turn back the way you came. My brother tells a story of being lost with his wife in Southern California’s Los Padres National Forest, not far from where captive-bred

condors are released. The story boils down to this: Outdated guidebook recommends a multiday loop that the Forest Service stopped maintaining in the late Eighties; maddening overgrowth of chaparral and manzanita; poison oak oil seeping into the cuts and scrapes; trailside signposts without any signs; really losing the trail in a place jovially known as “The Devil’s Pothole;” concerned co-workers asking highway patrol to check accident records for any sign of missing couple; and a humiliating retreat. How painful is it to retrace your path when you planned a loop? Well, many years after this misadventure, my brother still rants at length about Forest Service budget cuts and their effect on trail maintenance. He forgets to mention that, while lost in the Los Padres, he and his wife conceived their first

child. He’s still too steamed at the first Bush Administration. Which brings up an important point: Should you ever become lost, be sure to blame someone else. Amelia Earhart might assert that getting lost really stinks. But for most, getting lost is not a life-threatening crisis, it’s an inconvenience. The twenty-first century, however, has declared a holy war on inconvenience. Through cell phones and GPS locators, we try to prevent people from ever getting lost, to keep them present and accounted for at all times. What a bunch of weenies we are. If you get lost, take the opportunity to tap into some of our better human qualities: power of deduction, sense of direction, and animalistic sense of preservation. For instance, a few years ago I took a solo tour of the Tattoosh Range in Rainier National Park. I