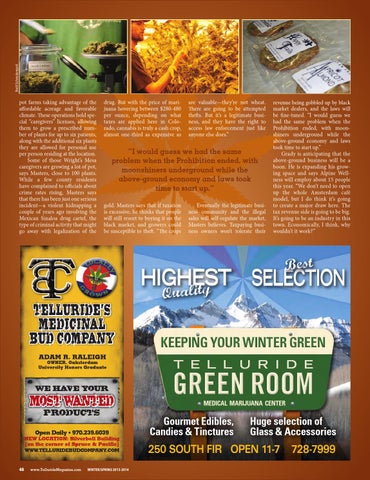 pot farms taking advantage of the affordable acreage and favorable climate. These operations hold special “caregivers” licenses, allowing them to grow a prescribed number of plants for up to six patients, along with the additional six plants they are allowed for personal use per person residing at the location. Some of those Wright’s Mesa caregivers are growing a lot of pot, says Masters, close to 100 plants. While a few county residents have complained to officials about crime rates rising, Masters says that there has been just one serious incident—a violent kidnapping a couple of years ago involving the Mexican Sinaloa drug cartel, the type of criminal activity that might go away with legalization of the

drug. But with the price of marijuana hovering between $280-480 per ounce, depending on what taxes are applied here in Colorado, cannabis is truly a cash crop, almost one-third as expensive as

are valuable—they’re not wheat. There are going to be attempted thefts. But it’s a legitimate business, and they have the right to access law enforcement just like anyone else does.”

“I would guess we had the same problem when the Prohibition ended, with moonshiners underground while the above-ground economy and laws took time to start up.” gold. Masters says that if taxation is excessive, he thinks that people will still resort to buying it on the black market, and growers could be susceptible to theft. “The crops

revenue being gobbled up by black market dealers, and the laws will be fine-tuned. “I would guess we had the same problem when the Prohibition ended, with moonshiners underground while the above-ground economy and laws took time to start up.” Grady is anticipating that the above-ground business will be a boon. He is expanding his growing space and says Alpine Wellness will employ about 15 people this year. “We don’t need to open up the whole Amsterdam café model, but I do think it’s going to create a major draw here. The tax revenue side is going to be big. It’s going to be an industry in this town. Economically, I think, why wouldn’t it work?”