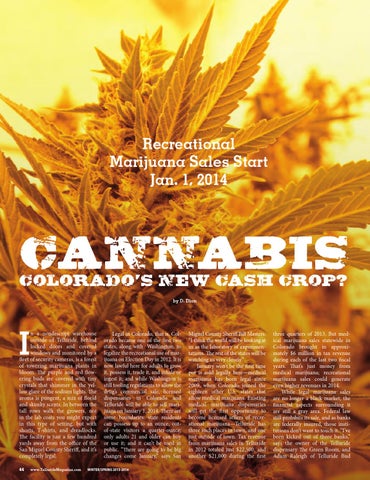 n a nondescript warehouse outside of Telluride, behind locked doors and covered windows and monitored by a fleet of security cameras, is a forest of towering marijuana plants in bloom. The purple and red flowering buds are covered with tiny crystals that shimmer in the yellow glare of the sodium lights. The aroma is pungent, a mix of florid and skunky scents. In between the tall rows walk the growers, not in the lab coats you might expect in this type of setting, but with shorts, T-shirts, and dreadlocks. The facility is just a few hundred yards away from the office of the San Miguel County Sheriff, and it’s completely legal. 44

Legal in Colorado, that is. Colorado became one of the first two states, along with Washington, to legalize the recreational use of marijuana on Election Day in 2012. It is now lawful here for adults to grow it, possess it, trade it, and inhale or ingest it; and while Washington is still tooling regulations to allow the drug’s commercial sale, licensed dispensaries in Colorado and Telluride will be able to sell marijuana on January 1, 2014. There are some boundaries: state residents can possess up to an ounce, outof-state visitors a quarter-ounce; only adults 21 and older can buy or use it; and it can’t be used in public. “There are going to be big changes come January,” says San

Miguel County Sheriff Bill Masters. “I think the world will be looking at us as the laboratory of experimentations. The rest of the states will be watching us very closely.” January won’t be the first time pot is sold legally here—medical marijuana has been legal since 2009, when Colorado joined the eighteen other U.S. states that allow medical marijuana. Existing medical marijuana dispensaries will get the first opportunity to become licensed sellers of recreational marijuana—Telluride has three such places in town, and one just outside of town. Tax revenue from marijuana sales in Telluride in 2012 totaled just $22,500, and another $21,000 during the first

three quarters of 2013. But medical marijuana sales statewide in Colorado brought in approximately $6 million in tax revenue during each of the last two fiscal years. That’s just money from medical marijuana; recreational marijuana sales could generate even higher revenues in 2014. While legal marijuana sales are no longer a black market, the financial aspects surrounding it are still a gray area. Federal law still prohibits its sale, and as banks are federally insured, those institutions don’t want to touch it. “I’ve been kicked out of three banks,” says the owner of the Telluride dispensary The Green Room, and Adam Raleigh of Telluride Bud