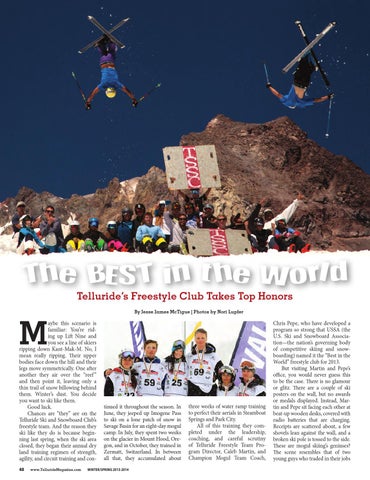 aybe this scenario is familiar: You’re riding up Lift Nine and you see a line of skiers ripping down Kant-Mak-M. No, I mean really ripping. Their upper bodies face down the hill and their legs move symmetrically. One after another they air over the “reef ” and then point it, leaving only a thin trail of snow billowing behind them. Winter’s dust. You decide you want to ski like them. Good luck. Chances are “they” are on the Telluride Ski and Snowboard Club’s freestyle team. And the reason they ski like they do is because beginning last spring, when the ski area closed, they began their annual dry land training regimen of strength, agility, and circuit training and con40

tinued it throughout the season. In June, they jeeped up Imogene Pass to ski on a lone patch of snow in Savage Basin for an eight-day mogul camp. In July, they spent two weeks on the glacier in Mount Hood, Oregon, and in October, they trained in Zermatt, Switzerland. In between all that, they accumulated about

three weeks of water ramp training to perfect their aerials in Steamboat Springs and Park City. All of this training they completed under the leadership, coaching, and careful scrutiny of Telluride Freestyle Team Program Director, Caleb Martin, and Champion Mogul Team Coach,

Chris Pepe, who have developed a program so strong that USSA (the U.S. Ski and Snowboard Association—the nation’s governing body of competitive skiing and snowboarding) named it the “Best in the World” freestyle club for 2013. But visiting Martin and Pepe’s office, you would never guess this to be the case. There is no glamour or glitz. There are a couple of ski posters on the wall, but no awards or medals displayed. Instead, Martin and Pepe sit facing each other at beat-up wooden desks, covered with radio batteries that are charging. Receipts are scattered about, a few shovels lean against the wall, and a broken ski pole is tossed to the side. These are mogul skiing’s geniuses? The scene resembles that of two young guys who traded in their jobs