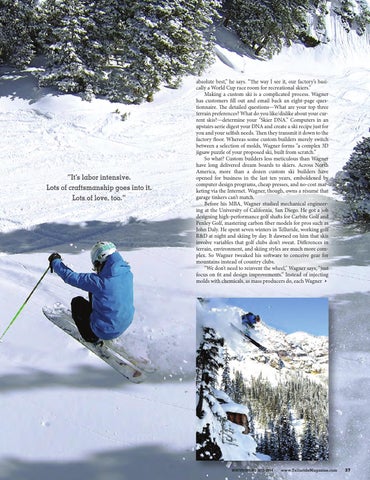 “It’s labor intensive. Lots of craftsmanship goes into it. Lots of love, too.”

absolute best,” he says. “The way I see it, our factory’s basically a World Cup race room for recreational skiers.” Making a custom ski is a complicated process. Wagner has customers fill out and email back an eight-page questionnaire. The detailed questions—What are your top three terrain preferences? What do you like/dislike about your current skis?—determine your “Skier DNA.” Computers in an upstairs aerie digest your DNA and create a ski recipe just for you and your selfish needs. Then they transmit it down to the factory floor. Whereas some custom builders merely switch between a selection of molds, Wagner forms “a complex 3D jigsaw puzzle of your proposed ski, built from scratch.” So what? Custom builders less meticulous than Wagner have long delivered dream boards to skiers. Across North America, more than a dozen custom ski builders have opened for business in the last ten years, emboldened by computer design programs, cheap presses, and no-cost marketing via the Internet. Wagner, though, owns a résumé that garage tinkers can’t match. Before his MBA, Wagner studied mechanical engineering at the University of California, San Diego. He got a job designing high-performance golf shafts for Carbite Golf and Penley Golf, mastering carbon fiber models for pros such as John Daly. He spent seven winters in Telluride, working golf R&amp;D at night and skiing by day. It dawned on him that skis involve variables that golf clubs don’t sweat. Differences in terrain, environment, and skiing styles are much more complex. So Wagner tweaked his software to conceive gear for mountains instead of country clubs. “We don’t need to reinvent the wheel,” Wagner says, “just focus on fit and design improvements.” Instead of injecting molds with chemicals, as mass producers do, each Wagner &#39;