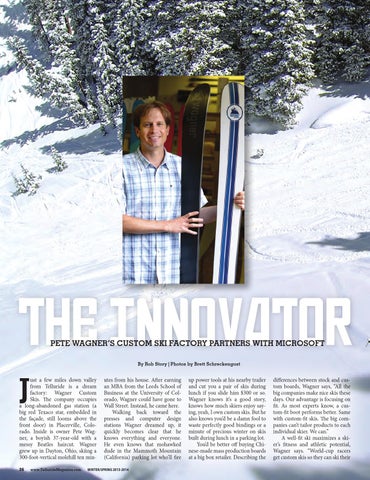 ust a few miles down valley from Telluride is a dream factory: Wagner Custom Skis. The company occupies a long-abandoned gas station (a big red Texaco star, embedded in the façade, still looms above the front door) in Placerville, Colorado. Inside is owner Pete Wagner, a boyish 37-year-old with a messy Beatles haircut. Wagner grew up in Dayton, Ohio, skiing a 300-foot-vertical molehill ten min-

utes from his house. After earning an MBA from the Leeds School of Business at the University of Colorado, Wagner could have gone to Wall Street. Instead, he came here. Walking back toward the presses and computer design stations Wagner dreamed up, it quickly becomes clear that he knows everything and everyone. He even knows that mohawked dude in the Mammoth Mountain (California) parking lot who’ll fire

up power tools at his nearby trailer and cut you a pair of skis during lunch if you slide him $300 or so. Wagner knows it’s a good story, knows how much skiers enjoy saying, yeah, I own custom skis. But he also knows you’d be a damn fool to waste perfectly good bindings or a minute of precious winter on skis built during lunch in a parking lot. You’d be better off buying Chinese-made mass production boards at a big box retailer. Describing the

differences between stock and custom boards, Wagner says, “All the big companies make nice skis these days. Our advantage is focusing on fit. As most experts know, a custom-fit boot performs better. Same with custom-fit skis. The big companies can’t tailor products to each individual skier. We can.” A well-fit ski maximizes a skier’s fitness and athletic potential, Wagner says. “World-cup racers get custom skis so they can ski their