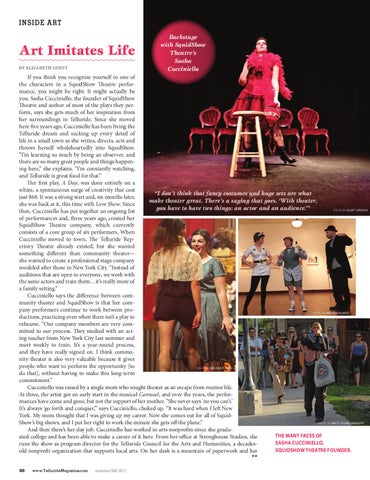 If you think you recognize yourself in one of the characters in a SquidShow Theatre performance, you might be right. It might actually be you. Sasha Cucciniello, the founder of SquidShow Theatre and author of most of the plays they perform, says she gets much of her inspiration from her surroundings in Telluride. Since she moved here five years ago, Cucciniello has been living the Telluride dream and sucking up every detail of life in a small town as she writes, directs, acts and throws herself wholeheartedly into SquidShow. “I’m learning so much by being an observer, and there are so many great people and things happening here,” she explains. “I’m constantly watching, and Telluride is great food for that.” Her first play, A Day, was done entirely on a whim, a spontaneous surge of creativity that cost “I don’t think that fancy costumes and huge sets are what just $68. It was a strong start and, six months later, make theater great. There’s a saying that goes, ‘With theater, she was back at it, this time with Love Show. Since you have to have two things: an actor and an audience.’” photo by scott upshur then, Cucciniello has put together an ongoing list of performances and, three years ago, created her SquidShow Theatre company, which currently consists of a core group of six performers. When Cucciniello moved to town, The Telluride Repertory Theatre already existed, but she wanted something different than community theater— she wanted to create a professional stage company modeled after those in New York City. “Instead of auditions that are open to everyone, we work with the same actors and train them…it’s really more of a family setting.” Cucciniello says the difference between community theater and SquidShow is that her company performers continue to work between prophoto by melissa plantz ductions, practicing even when there isn’t a play to rehearse. “Our company members are very committed to our process. They studied with an acting teacher from New York City last summer and meet weekly to train. It’s a year-round process, and they have really signed on. I think community theater is also very valuable because it gives people who want to perform the opportunity [to photo by melissa plantz do that], without having to make this long-term commitment.” Cucciniello was raised by a single mom who sought theater as an escape from routine life. At three, the artist got an early start in the musical Carousel, and over the years, the performances have come and gone, but not the support of her mother. “She never says ‘no you can’t.’ It’s always ‘go forth and conquer,’” says Cucciniello, choked up. “It was hard when I left New York. My mom thought that I was giving up my career. Now she comes out for all of Squidphoto by brett schreckengost Show’s big shows, and I put her right to work the minute she gets off the plane.” And then there’s her day job. Cucciniello has worked in arts nonprofits since she graduthe many faces of ated college and has been able to make a career of it here. From her office at Stronghouse Studios, she sasha cucciniello, runs the show as program director for the Telluride Council for the Arts and Humanities, a decadessquidshow theatre founder. old nonprofit organization that supports local arts. On her desk is a mountain of paperwork and her ▶▶