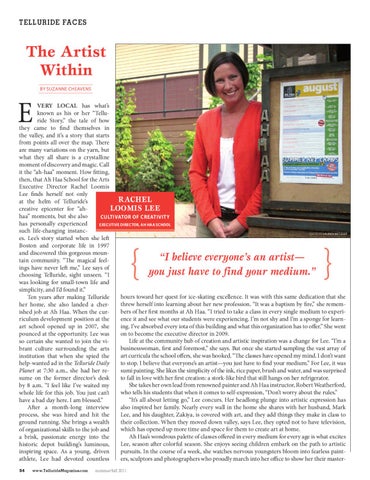 The Artist Within By suzanne cheavens

very local has what’s known as his or her “Telluride Story,” the tale of how they came to find themselves in the valley, and it’s a story that starts from points all over the map. There are many variations on the yarn, but what they all share is a crystalline moment of discovery and magic. Call it the “ah-haa” moment. How fitting, then, that Ah Haa School for the Arts Executive Director Rachel Loomis Lee finds herself not only rachel at the helm of Telluride’s creative epicenter for “ahloomis lee haa” moments, but she also cultivator of creativity has personally experienced executive director, ah haa SCHOOL such life-changing instancphoto by lauren metzger es. Lee’s story started when she left Boston and corporate life in 1997 and discovered this gorgeous mountain community. “The magical feelings have never left me,” Lee says of choosing Telluride, sight unseen. “I was looking for small-town life and simplicity, and I’d found it.” hours toward her quest for ice-skating excellence. It was with this same dedication that she Ten years after making Telluride threw herself into learning about her new profession. “It was a baptism by fire,” she rememher home, she also landed a cherbers of her first months at Ah Haa. “I tried to take a class in every single medium to experiished job at Ah Haa. When the curence it and see what our students were experiencing. I’m not shy and I’m a sponge for learnriculum development position at the ing. I’ve absorbed every iota of this building and what this organization has to offer.” She went art school opened up in 2007, she on to become the executive director in 2009. pounced at the opportunity. Lee was Life at the community hub of creation and artistic inspiration was a change for Lee. “I’m a so certain she wanted to join the vibusinesswoman, first and foremost,” she says. But once she started sampling the vast array of brant culture surrounding the arts art curricula the school offers, she was hooked. “The classes have opened my mind. I don’t want institution that when she spied the to stop. I believe that everyone’s an artist—you just have to find your medium.” For Lee, it was help-wanted ad in the Telluride Daily sumi painting. She likes the simplicity of the ink, rice paper, brush and water, and was surprised Planet at 7:30 a.m., she had her reto fall in love with her first creation: a stork-like bird that still hangs on her refrigerator. sume on the former director’s desk She takes her own lead from renowned painter and Ah Haa instructor, Robert Weatherford, by 8 a.m. “I feel like I’ve waited my who tells his students that when it comes to self-expression, “Don’t worry about the rules.” whole life for this job. You just can’t “It’s all about letting go,” Lee concurs. Her headlong plunge into artistic expression has have a bad day here. I am blessed.” also inspired her family. Nearly every wall in the home she shares with her husband, Mark After a month-long interview Lee, and his daughter, Zakiya, is covered with art, and they add things they make in class to process, she was hired and hit the their collection. When they moved down valley, says Lee, they opted not to have television, ground running. She brings a wealth which has opened up more time and space for them to create art at home. of organizational skills to the job and Ah Haa’s wondrous palette of classes offered in every medium for every age is what excites a brisk, passionate energy into the Lee, season after colorful season. She enjoys seeing children embark on the path to artistic historic depot building’s luminous, pursuits. In the course of a week, she watches nervous youngsters bloom into fearless paintinspiring space. As a young, driven ers, sculptors and photographers who proudly march into her office to show her their masterathlete, Lee had devoted countless

“I believe everyone’s an artist­— you just have to find your medium.”