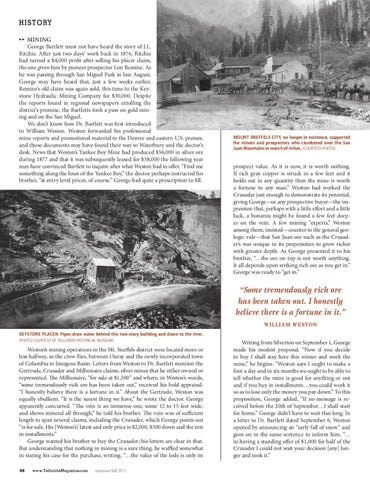 George Bartlett must not have heard the story of J.L. Ritchie. After just two days’ work back in 1876, Ritchie had turned a $4,000 profit after selling his placer claim, the one given him by pioneer prospector Lon Remine. As he was passing through San Miguel Park in late August, George may have heard that, just a few weeks earlier, Remine’s old claim was again sold, this time to the Keystone Hydraulic Mining Company for $30,000. Despite the reports found in regional newspapers extolling the district’s promise, the Bartletts took a pass on gold mining and on the San Miguel. We don’t know how Dr. Bartlett was first introduced to William Weston. Weston forwarded his professional mine reports and promotional material to the Denver and eastern U.S. presses, and those documents may have found their way to Waterbury and the doctor’s desk. News that Weston’s Yankee Boy Mine had produced $56,000 in silver ore during 1877 and that it was subsequently leased for $58,000 the following year may have convinced Bartlett to inquire after what Weston had to offer. “Find me something along the lines of the Yankee Boy,” the doctor perhaps instructed his brother, “at entry level prices, of course.” George had quite a prescription to fill.

Mount Sneffels City, no longer in existence, supported the miners and prospectors who clambered over the San Juan Mountains in search of riches. (courtesy PHOTO)

prospect value. As it is now, it is worth nothing. If rich gray copper is struck in a few feet and it holds out in any quantity then the mine is worth a fortune to any man.” Weston had worked the Crusader just enough to demonstrate its potential, giving George—or any prospective buyer—the impression that, perhaps with a little effort and a little luck, a bonanza might be found a few feet deeper on the vein. A few mining “experts,” Weston among them, insisted—counter to the general geologic rule—that San Juan ore such as the Crusader’s was unique in its propensities to grow richer with greater depth. As George presented it to his brother, “…the ore on top is not worth anything. It all depends upon striking rich ore as you get in.” George was ready to “get in.”

“Some tremendously rich ore has been taken out. I honestly believe there is a fortune in it.” William Weston Keystone placer: Pipes draw water behind this two-story building and down to the river. (pHOTO courtesy of Telluride Historical Museum)

Weston’s mining operations in the Mt. Sneffels district were located more or less halfway, as the crow flies, between Ouray and the newly incorporated town of Columbia in Imogene Basin. Letters from Weston to Dr. Bartlett mention the Gertrude, Crusader and Millionaire claims, silver mines that he either owned or represented. The Millionaire, “for sale at $1,500” and where, in Weston’s words, “some tremendously rich ore has been taken out,” received his bold appraisal: “I honestly believe there is a fortune in it.” About the Gertrude, Weston was equally ebullient. “It is the surest thing we have,” he wrote the doctor. George apparently concurred. “The vein is an immense one, some 12 to 15 feet wide, and shows mineral all through,” he told his brother. The vein was of sufficient length to span several claims, including the Crusader, which George points out “is for sale. His [Weston’s] latest and only price is $2,000, $500 down and the rest in installments.” George wanted his brother to buy the Crusader; his letters are clear in that. But understanding that nothing in mining is a sure thing, he waffled somewhat in stating his case for the purchase, writing, “…the value of the lode is only its 48

Writing from Silverton on September 1, George made his modest proposal. “Now if you decide to buy I shall stay here this winter and work the mine,” he begins. “Weston says I ought to make a foot a day and in six months we ought to be able to tell whether the mine is good for anything or not and if you buy in installments…you could work it so as to lose only the money you pay down.” To this proposition, George added, “If no message is received before the 20th of September…I shall start for home.” George didn’t have to wait that long. In a letter to Dr. Bartlett dated September 6, Weston opened by announcing an “early fall of snow” and goes on in the same sentence to inform him, “… in having a standing offer of $1,000 for half of the Crusader I could not wait your decision [any] longer and took it.”