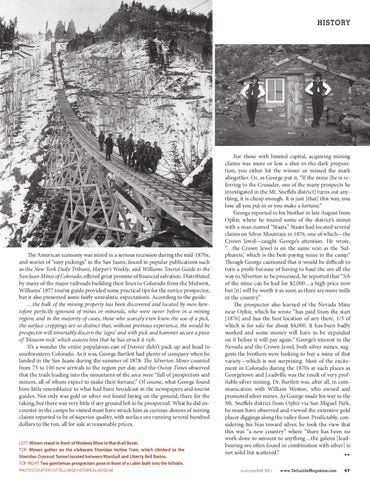 The American economy was mired in a serious recession during the mid-1870s, and stories of “easy pickings” in the San Juans, found in popular publications such as the New York Daily Tribune, Harper’s Weekly, and Williams Tourist Guide to the San Juan Mines of Colorado, offered great promise of financial salvation. Distributed by many of the major railroads building their lines to Colorado from the Midwest, Williams’ 1877 tourist guide provided some practical tips for the novice prospector, but it also presented some fairly unrealistic expectations. According to the guide: …the bulk of the mining property has been discovered and located by men heretofore perfectly ignorant of mines or minerals, who were never before in a mining region; and in the majority of cases, those who scarcely even knew the use of a pick, the surface croppings are so distinct that, without previous experience, the would-be prospector will invariably discern the ‘signs’ and with pick and hammer secure a piece of ‘blossom rock’ which assures him that he has struck it rich. It’s a wonder the entire population east of Denver didn’t pack up and head to southwestern Colorado. As it was, George Bartlett had plenty of company when he landed in the San Juans during the summer of 1878. The Silverton Miner counted from 75 to 100 new arrivals to the region per day, and the Ouray Times observed that the trails leading into the mountains of the area were “full of prospectors and miners, all of whom expect to make their fortune.” Of course, what George found bore little resemblance to what had been broadcast in the newspapers and tourist guides. Not only was gold or silver not found laying on the ground, there for the taking, but there was very little if any ground left to be prospected. What he did encounter in the camps he visited must have struck him as curious: dozens of mining claims reported to be of superior quality, with surface ore running several hundred dollars to the ton, all for sale at reasonable prices. LEFT: Miners stand in front of Modena Mine in Marshall Basin. TOP: Miners gather on the elaborate Sheridan Incline Tram, which climbed to the Sheridan Crosscut Tunnel located between Marshall and Liberty Bell Basins. TOP RIGHT: Two gentleman prospectors pose in front of a cabin built into the hillside. PHOTOs courtesy of Telluride Historical Museum

For those with limited capital, acquiring mining claims was more or less a shot-in-the-dark proposition; you either hit the winner or missed the mark altogether. Or, as George put it, “If the mine [he is referring to the Crusader, one of the many prospects he investigated in the Mt. Sneffels district] turns out anything, it is cheap enough. It is just [that] this way, you lose all you put in or you make a fortune.” George reported to his brother in late August from Ophir, where he toured some of the district’s mines with a man named “Staats.” Staats had located several claims on Silver Mountain in 1876, one of which—the Crown Jewel—caught George’s attention. He wrote, “…the Crown Jewel is on the same vein as the ‘Sulphurets,’ which is the best-paying mine in the camp.” Though George cautioned that it would be difficult to turn a profit because of having to haul the ore all the way to Silverton to be processed, he reported that “5/6 of the mine can be had for $2,000…a high price now but [it] will be worth it as soon as there are more mills in the country.” The prospector also learned of the Nevada Mine near Ophir, which he wrote “has paid from the start [1876] and has the best location of any there, 1/3 of which is for sale for about $4,000. It has been badly worked and some money will have to be expended on it before it will pay again.” George’s interest in the Nevada and the Crown Jewel, both silver mines, suggests the brothers were looking to buy a mine of that variety—which is not surprising. Most of the excitement in Colorado during the 1870s at such places as Georgetown and Leadville was the result of very profitable silver mining. Dr. Bartlett was, after all, in communication with William Weston, who owned and promoted silver mines. As George made his way to the Mt. Sneffels district from Ophir via San Miguel Park, he must have observed and viewed the extensive gold placer diggings along the valley floor. Predictably, considering his bias toward silver, he took the view that this was “a new country” where “there has been no work done to amount to anything…the galena [leadbearing ore often found in combination with silver] is not solid but scattered.” ▶▶ summer/fall 2011