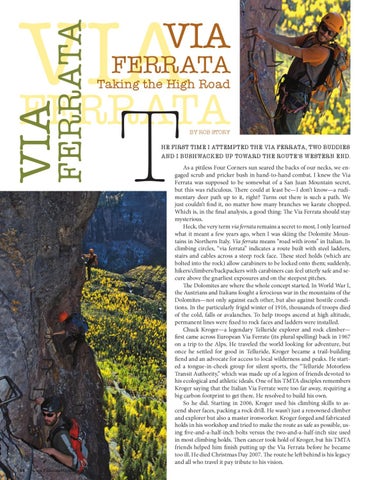 he first time I attempted the Via Ferrata, two buddies and I bushwacked up toward the route’s western end. As a pitiless Four Corners sun seared the backs of our necks, we engaged scrub and pricker bush in hand-to-hand combat. I knew the Via Ferrata was supposed to be somewhat of a San Juan Mountain secret, but this was ridiculous. There could at least be—I don’t know—a rudimentary deer path up to it, right? Turns out there is such a path. We just couldn’t find it, no matter how many branches we karate chopped. Which is, in the final analysis, a good thing: The Via Ferrata should stay mysterious. Heck, the very term via ferrata remains a secret to most. I only learned what it meant a few years ago, when I was skiing the Dolomite Mountains in Northern Italy. Via ferrata means “road with irons” in Italian. In climbing circles, “via ferrata” indicates a route built with steel ladders, stairs and cables across a steep rock face. These steel holds (which are bolted into the rock) allow carabiners to be locked onto them; suddenly, hikers/climbers/backpackers with carabiners can feel utterly safe and secure above the gnarliest exposures and on the steepest pitches. The Dolomites are where the whole concept started. In World War I, the Austrians and Italians fought a ferocious war in the mountains of the Dolomites—not only against each other, but also against hostile conditions. In the particularly frigid winter of 1916, thousands of troops died of the cold, falls or avalanches. To help troops ascend at high altitude, permanent lines were fixed to rock faces and ladders were installed. Chuck Kroger—a legendary Telluride explorer and rock climber— first came across European Via Ferrate (its plural spelling) back in 1967 on a trip to the Alps. He traveled the world looking for adventure, but once he settled for good in Telluride, Kroger became a trail-building fiend and an advocate for access to local wilderness and peaks. He started a tongue-in-cheek group for silent sports, the “Telluride Motorless Transit Authority,” which was made up of a legion of friends devoted to his ecological and athletic ideals. One of his TMTA disciples remembers Kroger saying that the Italian Via Ferrate were too far away, requiring a big carbon footprint to get there. He resolved to build his own. So he did. Starting in 2006, Kroger used his climbing skills to ascend sheer faces, packing a rock drill. He wasn’t just a renowned climber and explorer but also a master ironworker. Kroger forged and fabricated holds in his workshop and tried to make the route as safe as possible, using five-and-a-half-inch bolts versus the two-and-a-half-inch size used in most climbing holds. Then cancer took hold of Kroger, but his TMTA friends helped him finish putting up the Via Ferrata before he became too ill. He died Christmas Day 2007. The route he left behind is his legacy and all who travel it pay tribute to his vision.