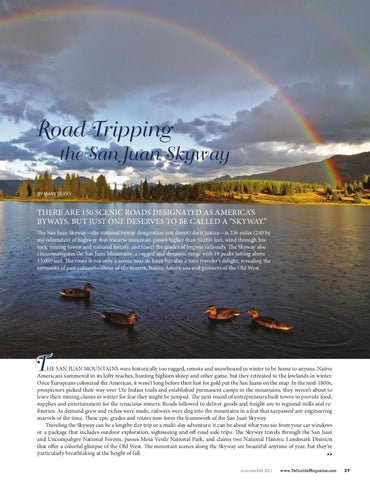 There are 150 scenic roads designated as America’s Byways, but just one deserves to be called a “skyway.” The San Juan Skyway—the national byway designation just doesn’t do it justice—is 236 miles (240 by my odometer) of highway that traverse mountain passes higher than 10,000 feet, wind through historic mining towns and national forests, and travel the grades of bygone railroads. The Skyway also circumnavigates the San Juan Mountains, a rugged and dynamic range with 19 peaks jutting above 13,000 feet. The route is not only a scenic tour de force but also a time traveler’s delight, revealing the remnants of past cultures—those of the miners, Native Americans and pioneers of the Old West.

he San Juan Mountains were historically too rugged, remote and snowbound in winter to be home to anyone. Native Americans summered in its lofty reaches, hunting bighorn sheep and other game, but they retreated to the lowlands in winter. Once Europeans colonized the Americas, it wasn’t long before their lust for gold put the San Juans on the map. In the mid-1800s, prospectors picked their way over Ute Indian trails and established permanent camps in the mountains; they weren’t about to leave their mining claims in winter for fear they might be jumped. The next round of entrepreneurs built towns to provide food, supplies and entertainment for the tenacious miners. Roads followed to deliver goods and freight ore to regional mills and refineries. As demand grew and riches were made, railways were dug into the mountains in a feat that surpassed any engineering marvels of the time. These epic grades and routes now form the framework of the San Juan Skyway. Traveling the Skyway can be a lengthy day trip or a multi-day adventure; it can be about what you see from your car windows or a package that includes outdoor exploration, sightseeing and off-road side trips. The Skyway travels through the San Juan and Uncompahgre National Forests, passes Mesa Verde National Park, and claims two National Historic Landmark Districts that offer a colorful glimpse of the Old West. The mountain scenes along the Skyway are beautiful anytime of year, but they’re particularly breathtaking at the height of fall. ▶▶ photo courtesy summer/fall 2011