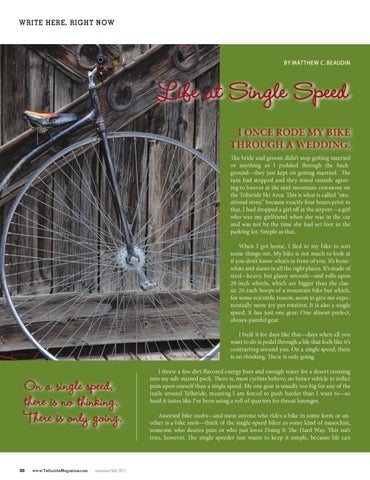 Life at Single Speed I once rode my bike through a wedding. The bride and groom didn’t stop getting married or anything as I pedaled through the background—they just kept on getting married. The rain had stopped and they stood outside agreeing to forever at the mid-mountain ceremony on the Telluride Ski Area. This is what is called “situational irony,” because exactly four hours prior to that, I had dropped a girl off at the airport—a girl who was my girlfriend when she was in the car and was not by the time she had set foot in the parking lot. Simple as that. When I got home, I fled to my bike to sort some things out. My bike is not much to look at if you don’t know what’s in front of you. It’s bonewhite and slants in all the right places. It’s made of steel—heavy, but glassy smooth—and rolls upon 29-inch wheels, which are bigger than the classic 26-inch hoops of a mountain bike but which, for some scientific reason, seem to give me exponentially more joy per rotation. It is also a single speed. It has just one gear: One almost-perfect, always-painful gear.

On a single speed, there is no thinking. There is only going. 30

I built it for days like that—days when all you want to do is pedal through a life that feels like it’s contracting around you. On a single speed, there is no thinking. There is only going.

I threw a few dirt-flavored energy bars and enough water for a desert crossing into my salt-stained pack. There is, most cyclists believe, no better vehicle to inflict pain upon oneself than a single speed. My one gear is usually too big for any of the trails around Telluride, meaning I am forced to push harder than I want to—so hard it tastes like I’ve been using a roll of quarters for throat lozenges. Assorted bike snobs—and most anyone who rides a bike in some form or another is a bike snob—think of the single-speed biker as some kind of masochist, someone who desires pain or who just loves Doing It The Hard Way. This isn’t true, however. The single speeder just wants to keep it simple, because life can