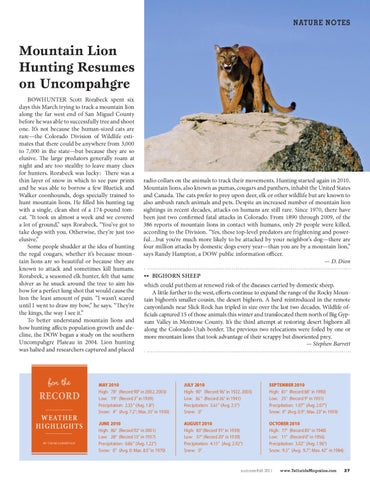 Mountain Lion Hunting Resumes on Uncompahgre bowhunter Scott Rorabeck spent six days this March trying to track a mountain lion along the far west end of San Miguel County before he was able to successfully tree and shoot one. It’s not because the human-sized cats are rare—the Colorado Division of Wildlife estimates that there could be anywhere from 3,000 to 7,000 in the state—but because they are so elusive. The large predators generally roam at night and are too stealthy to leave many clues for hunters. Rorabeck was lucky: There was a thin layer of snow in which to see paw prints and he was able to borrow a few Bluetick and Walker coonhounds, dogs specially trained to hunt mountain lions. He filled his hunting tag with a single, clean shot of a 174-pound tomcat. “It took us almost a week and we covered a lot of ground,” says Rorabeck. “You’ve got to take dogs with you. Otherwise, they’re just too elusive.” Some people shudder at the idea of hunting the regal cougars, whether it’s because mountain lions are so beautiful or because they are known to attack and sometimes kill humans. Rorabeck, a seasoned elk hunter, felt that same shiver as he snuck around the tree to aim his bow for a perfect lung shot that would cause the lion the least amount of pain. “I wasn’t scared until I went to draw my bow,” he says. “They’re the kings, the way I see it.” To better understand mountain lions and how hunting affects population growth and decline, the DOW began a study on the southern Uncompahgre Plateau in 2004. Lion hunting was halted and researchers captured and placed

radio collars on the animals to track their movements. Hunting started again in 2010. Mountain lions, also known as pumas, cougars and panthers, inhabit the United States and Canada. The cats prefer to prey upon deer, elk or other wildlife but are known to also ambush ranch animals and pets. Despite an increased number of mountain lion sightings in recent decades, attacks on humans are still rare. Since 1970, there have been just two confirmed fatal attacks in Colorado. From 1890 through 2009, of the 386 reports of mountain lions in contact with humans, only 29 people were killed, according to the Division. “Yes, these top-level predators are frightening and powerful…but you’re much more likely to be attacked by your neighbor’s dog—there are four million attacks by domestic dogs every year—than you are by a mountain lion,” says Randy Hampton, a DOW public information officer. ­­— D. Dion Bighorn Sheep which could put them at renewed risk of the diseases carried by domestic sheep. A little further to the west, efforts continue to expand the range of the Rocky Mountain bighorn’s smaller cousin, the desert bighorn. A herd reintroduced in the remote canyonlands near Slick Rock has tripled in size over the last two decades. Wildlife officials captured 15 of those animals this winter and translocated them north of Big Gypsum Valley in Montrose County. It’s the third attempt at restoring desert bighorn all along the Colorado-Utah border. The previous two relocations were foiled by one or more mountain lions that took advantage of their scrappy but disoriented prey. ­­— Stephen Barrett ▶▶