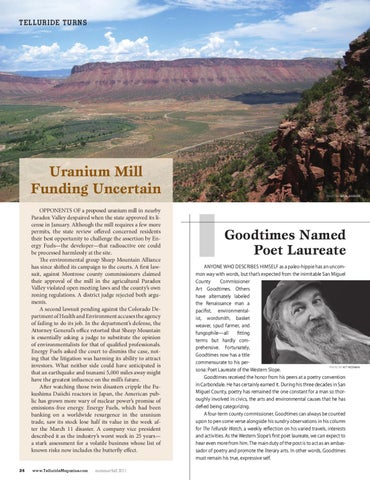 Uranium Mill Funding Uncertain Opponents of a proposed uranium mill in nearby Paradox Valley despaired when the state approved its license in January. Although the mill requires a few more permits, the state review offered concerned residents their best opportunity to challenge the assertion by Energy Fuels—the developer—that radioactive ore could be processed harmlessly at the site. The environmental group Sheep Mountain Alliance has since shifted its campaign to the courts. A first lawsuit, against Montrose county commissioners claimed their approval of the mill in the agricultural Paradox Valley violated open meeting laws and the county’s own zoning regulations. A district judge rejected both arguments. A second lawsuit pending against the Colorado Department of Health and Environment accuses the agency of failing to do its job. In the department’s defense, the Attorney General’s office retorted that Sheep Mountain is essentially asking a judge to substitute the opinion of environmentalists for that of qualified professionals. Energy Fuels asked the court to dismiss the case, noting that the litigation was harming its ability to attract investors. What neither side could have anticipated is that an earthquake and tsunami 5,000 miles away might have the greatest influence on the mill’s future. After watching those twin disasters cripple the Fukushima Daiichi reactors in Japan, the American public has grown more wary of nuclear power’s promise of emissions-free energy. Energy Fuels, which had been banking on a worldwide resurgence in the uranium trade, saw its stock lose half its value in the week after the March 11 disaster. A company vice president described it as the industry’s worst week in 25 years— a stark assessment for a volatile business whose list of known risks now includes the butterfly effect. 24

Goodtimes Named Poet Laureate Anyone who describes himself as a paleo-hippie has an uncommon way with words, but that’s expected from the inimitable San Miguel County Commissioner Art Goodtimes. Others have alternately labeled the Renaissance man a pacifist, environmentalist, wordsmith, basket weaver, spud farmer, and fungophile—all fitting terms but hardly comprehensive. Fortunately, Goodtimes now has a title commensurate to his perphoto by kit hedman sona: Poet Laureate of the Western Slope. Goodtimes received the honor from his peers at a poetry convention in Carbondale. He has certainly earned it. During his three decades in San Miguel County, poetry has remained the one constant for a man so thoroughly involved in civics, the arts and environmental causes that he has defied being categorizing. A four-term county commissioner, Goodtimes can always be counted upon to pen some verse alongside his sundry observations in his column for The Telluride Watch, a weekly reflection on his varied travels, interests and activities. As the Western Slope’s first poet laureate, we can expect to hear even more from him. The main duty of the post is to act as an ambassador of poetry and promote the literary arts. In other words, Goodtimes must remain his true, expressive self.