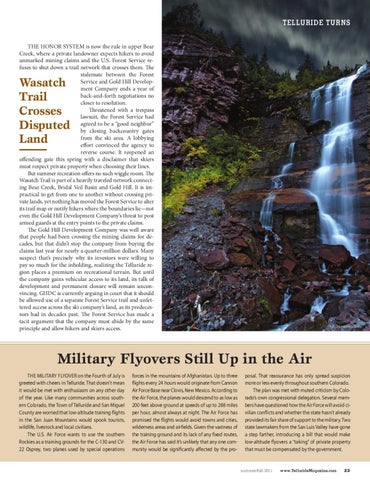 telluride turns The honor system is now the rule in upper Bear Creek, where a private landowner expects hikers to avoid unmarked mining claims and the U.S. Forest Service refuses to shut down a trail network that crosses them. The stalemate between the Forest Service and Gold Hill Development Company ends a year of back-and-forth negotiations no closer to resolution. Threatened with a trespass lawsuit, the Forest Service had agreed to be a “good neighbor” by closing backcountry gates from the ski area. A lobbying effort convinced the agency to reverse course. It reopened an offending gate this spring with a disclaimer that skiers must respect private property when choosing their lines. But summer recreation offers no such wiggle room. The Wasatch Trail is part of a heavily traveled network connecting Bear Creek, Bridal Veil Basin and Gold Hill. It is impractical to get from one to another without crossing private lands, yet nothing has moved the Forest Service to alter its trail map or notify hikers where the boundaries lie—not even the Gold Hill Development Company’s threat to post armed guards at the entry points to the private claims. The Gold Hill Development Company was well aware that people had been crossing the mining claims for decades, but that didn’t stop the company from buying the claims last year for nearly a quarter-million dollars. Many suspect that’s precisely why its investors were willing to pay so much for the inholding, realizing the Telluride region places a premium on recreational terrain. But until the company gains vehicular access to its land, its talk of development and permanent closure will remain unconvincing. GHDC is currently arguing in court that it should be allowed use of a separate Forest Service trail and unfettered access across the ski company’s land, as its predecessors had in decades past. The Forest Service has made a tacit argument that the company must abide by the same principle and allow hikers and skiers access.

Military Flyovers Still Up in the Air The military flyover on the Fourth of July is greeted with cheers in Telluride. That doesn’t mean it would be met with enthusiasm on any other day of the year. Like many communities across southern Colorado, the Town of Telluride and San Miguel County are worried that low-altitude training flights in the San Juan Mountains would spook tourists, wildlife, livestock and local civilians. The U.S. Air Force wants to use the southern Rockies as a training grounds for the C-130 and CV22 Osprey, two planes used by special operations

forces in the mountains of Afghanistan. Up to three flights every 24 hours would originate from Cannon Air Force Base near Clovis, New Mexico. According to the Air Force, the planes would descend to as low as 200 feet above ground at speeds of up to 288 miles per hour, almost always at night. The Air Force has promised the flights would avoid towns and cities, wilderness areas and airfields. Given the vastness of the training ground and its lack of any fixed routes, the Air Force has said it’s unlikely that any one community would be significantly affected by the pro-

posal. That reassurance has only spread suspicion more or less evenly throughout southern Colorado. The plan was met with muted criticism by Colorado’s own congressional delegation. Several members have questioned how the Air Force will avoid civilian conflicts and whether the state hasn’t already provided its fair share of support to the military. Two state lawmakers from the San Luis Valley have gone a step farther, introducing a bill that would make low-altitude flyovers a “taking” of private property that must be compensated by the government.