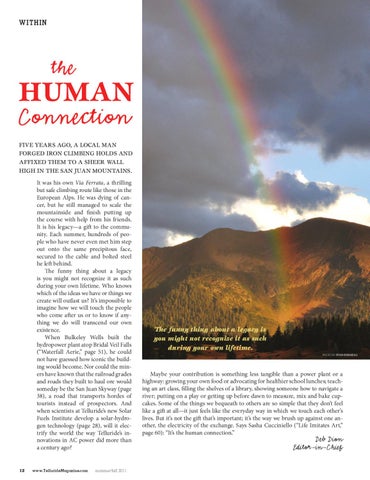 Human Connection Five years ago, a local man forged iron climbing holds and affixed them to a sheer wall high in the San Juan Mountains.

It was his own Via Ferrata, a thrilling but safe climbing route like those in the European Alps. He was dying of cancer, but he still managed to scale the mountainside and finish putting up the course with help from his friends. It is his legacy—a gift to the community. Each summer, hundreds of people who have never even met him step out onto the same precipitous face, secured to the cable and bolted steel he left behind. The funny thing about a legacy is you might not recognize it as such during your own lifetime. Who knows which of the ideas we have or things we create will outlast us? It’s impossible to imagine how we will touch the people who come after us or to know if anything we do will transcend our own existence. When Bulkeley Wells built the hydropower plant atop Bridal Veil Falls (“Waterfall Aerie,” page 51), he could not have guessed how iconic the building would become. Nor could the miners have known that the railroad grades and roads they built to haul ore would someday be the San Juan Skyway (page 38), a road that transports hordes of tourists instead of prospectors. And when scientists at Telluride’s new Solar Fuels Institute develop a solar-hydrogen technology (page 28), will it electrify the world the way Telluride’s innovations in AC power did more than a century ago?

The funny thing about a legacy is you might not recognize it as such during your own lifetime. photo by ryan bonneau

Maybe your contribution is something less tangible than a power plant or a highway: growing your own food or advocating for healthier school lunches; teaching an art class, filling the shelves of a library, showing someone how to navigate a river; putting on a play or getting up before dawn to measure, mix and bake cupcakes. Some of the things we bequeath to others are so simple that they don’t feel like a gift at all—it just feels like the everyday way in which we touch each other’s lives. But it’s not the gift that’s important; it’s the way we brush up against one another, the electricity of the exchange. Says Sasha Cucciniello (“Life Imitates Art,” page 60): “It’s the human connection.”