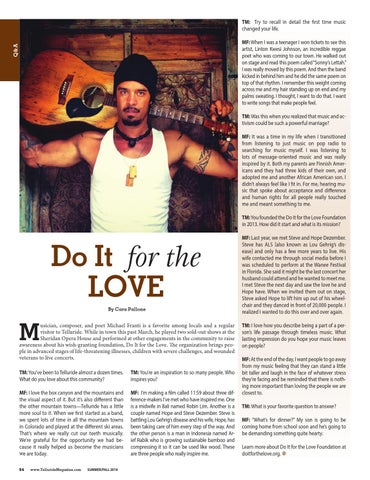 MF: When I was a teenager I won tickets to see this artist, Linton Kwesi Johnson, an incredible reggae poet who was coming to our town. He walked out on stage and read this poem called “Sonny’s Lettah.” I was really moved by this poem. And then the band kicked in behind him and he did the same poem on top of that rhythm. I remember this weight coming across me and my hair standing up on end and my palms sweating. I thought, I want to do that. I want to write songs that make people feel. TM: Was this when you realized that music and activism could be such a powerful marriage? MF: It was a time in my life when I transitioned from listening to just music on pop radio to searching for music myself. I was listening to lots of message-oriented music and was really inspired by it. Both my parents are Finnish Americans and they had three kids of their own, and adopted me and another African American son. I didn’t always feel like I fit in. For me, hearing music that spoke about acceptance and difference and human rights for all people really touched me and meant something to me. TM: You founded the Do It for the Love Foundation in 2013. How did it start and what is its mission?

Do It for the LOVE By Cara Pallone

usician, composer, and poet Michael Franti is a favorite among locals and a regular visitor to Telluride. While in town this past March, he played two sold-out shows at the Sheridan Opera House and performed at other engagements in the community to raise awareness about his wish-granting foundation, Do It for the Love. The organization brings people in advanced stages of life-threatening illnesses, children with severe challenges, and wounded veterans to live concerts. TM: You’ve been to Telluride almost a dozen times. What do you love about this community?

TM: You’re an inspiration to so many people. Who inspires you?

MF: I love the box canyon and the mountains and the visual aspect of it. But it’s also different than the other mountain towns—Telluride has a little more soul to it. When we first started as a band, we spent lots of time in all the mountain towns in Colorado and played at the different ski areas. That’s where we really cut our teeth musically. We’re grateful for the opportunity we had because it really helped us become the musicians we are today.

MF: I’m making a film called 11:59 about three difference-makers I’ve met who have inspired me. One is a midwife in Bali named Robin Lim. Another is a couple named Hope and Steve Dezember. Steve is battling Lou Gehrig’s disease and his wife, Hope, has been taking care of him every step of the way. And the other person is a man in Indonesia named Arief Rabik who is growing sustainable bamboo and compressing it so it can be used like wood. These are three people who really inspire me.

MF: Last year, we met Steve and Hope Dezember. Steve has ALS [also known as Lou Gehrig’s disease] and only has a few more years to live. His wife contacted me through social media before I was scheduled to perform at the Wanee Festival in Florida. She said it might be the last concert her husband could attend and he wanted to meet me. I met Steve the next day and saw the love he and Hope have. When we invited them out on stage, Steve asked Hope to lift him up out of his wheelchair and they danced in front of 20,000 people. I realized I wanted to do this over and over again. TM: I love how you describe being a part of a person’s life passage through timeless music. What lasting impression do you hope your music leaves on people? MF: At the end of the day, I want people to go away from my music feeling that they can stand a little bit taller and laugh in the face of whatever stress they’re facing and be reminded that there is nothing more important than loving the people we are closest to. TM: What is your favorite question to answer? MF: “What’s for dinner?” My son is going to be coming home from school soon and he’s going to be demanding something quite hearty. Learn more about Do It for the Love Foundation at doitforthelove.org. \

Overnight river trips by paddleboard, Do It For the Love foundation, Mount Wilson, The Colorado River's return to the sea, and Inside the Minds, and Gyms, of Telluride Fitness Gurus.