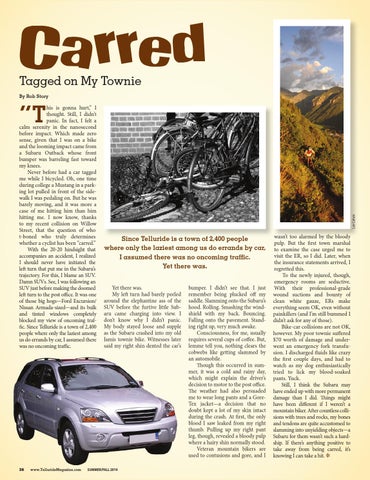 Carred Tagged on My Townie By Rob Story

his is gonna hurt,” I thought. Still, I didn’t panic. In fact, I felt a calm serenity in the nanosecond before impact. Which made zero sense, given that I was on a bike and the looming impact came from a Subaru Outback whose front bumper was barreling fast toward my knees. Never before had a car tagged me while I bicycled. Oh, one time during college a Mustang in a parking lot pulled in front of the sidewalk I was pedaling on. But he was barely moving, and it was more a case of me hitting him than him hitting me. I now know, thanks to my recent collision on Willow Street, that the question of who t-boned who truly determines whether a cyclist has been “carred.” With the 20-20 hindsight that accompanies an accident, I realized I should never have initiated the left turn that put me in the Subaru’s trajectory. For this, I blame an SUV. Damn SUVs. See, I was following an SUV just before making the doomed left turn to the post office. It was one of those big hogs—Ford Excursion/ Nissan Armada-sized—and its bulk and tinted windows completely blocked my view of oncoming traffic. Since Telluride is a town of 2,400 people where only the laziest among us do errands by car, I assumed there was no oncoming traffic.

Since Telluride is a town of 2,400 people where only the laziest among us do errands by car, I assumed there was no oncoming traffic. Yet there was. Yet there was. My left turn had barely peeled around the elephantine ass of the SUV before the furtive little Subaru came charging into view. I don’t know why I didn’t panic. My body stayed loose and supple as the Subaru crashed into my old Jamis townie bike. Witnesses later said my right shin dented the car’s

bumper. I didn’t see that. I just remember being plucked off my saddle. Slamming onto the Subaru’s hood. Rolling. Smashing the windshield with my back. Bouncing. Falling onto the pavement. Standing right up, very much awake. Consciousness, for me, usually requires several cups of coffee. But, lemme tell you, nothing clears the cobwebs like getting slammed by an automobile. Though this occurred in summer, it was a cold and rainy day, which might explain the driver’s decision to motor to the post office. The weather had also persuaded me to wear long pants and a GoreTex jacket—a decision that no doubt kept a lot of my skin intact during the crash. At first, the only blood I saw leaked from my right thumb. Pulling up my right pant leg, though, revealed a bloody pulp where a hairy shin normally stood. Veteran mountain bikers are used to contusions and gore, and I

wasn’t too alarmed by the bloody pulp. But the first town marshal to examine the case urged me to visit the ER, so I did. Later, when the insurance statements arrived, I regretted this. To the newly injured, though, emergency rooms are seductive. With their professional-grade wound suctions and bounty of clean white gauze, ERs make everything seem OK, even without painkillers (and I’m still bummed I didn’t ask for any of those). Bike-car collisions are not OK, however. My poor townie suffered $70 worth of damage and underwent an emergency fork transfusion. I discharged fluids like crazy the first couple days, and had to watch as my dog enthusiastically tried to lick my blood-soaked pants. Yuck. Still, I think the Subaru may have ended up with more permanent damage than I did. Things might have been different if I weren’t a mountain biker. After countless collisions with trees and rocks, my bones and tendons are quite accustomed to slamming into unyielding objects—a Subaru for them wasn’t such a hardship. If there’s anything positive to take away from being carred, it’s knowing I can take a hit. \

Overnight river trips by paddleboard, Do It For the Love foundation, Mount Wilson, The Colorado River's return to the sea, and Inside the Mi...

Overnight river trips by paddleboard, Do It For the Love foundation, Mount Wilson, The Colorado River's return to the sea, and Inside the Mi...