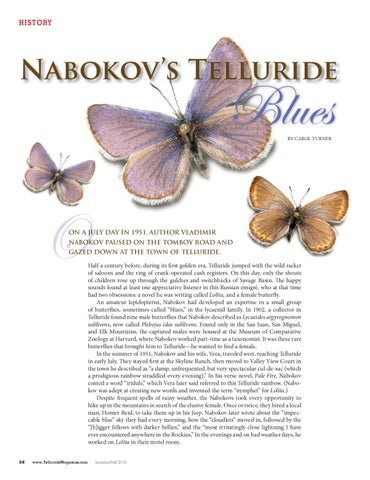 ON A JULY DAY IN 1951, AUTHOR VLADIMIR NABOKOV PAUSED ON THE TOMBOY ROAD AND GAZED DOWN AT THE TOWN OF TELLURIDE.

Half a century before, during its first golden era, Telluride jumped with the wild racket of saloons and the ring of crank-operated cash registers. On this day, only the shouts of children rose up through the gulches and switchbacks of Savage Basin. The happy sounds found at least one appreciative listener in this Russian émigré, who at that time had two obsessions: a novel he was writing called Lolita, and a female butterfly. An amateur lepidopterist, Nabokov had developed an expertise in a small group of butterflies, sometimes called “blues,” in the lycaenid family. In 1902, a collector in Telluride found nine male butterflies that Nabokov described as Lycaeides argyrognomon sublivens, now called Plebejus idas sublivens. Found only in the San Juan, San Miguel, and Elk Mountains, the captured males were housed at the Museum of Comparative Zoology at Harvard, where Nabokov worked part-time as a taxonomist. It was these rare butterflies that brought him to Telluride—he wanted to find a female. In the summer of 1951, Nabokov and his wife, Vera, traveled west, reaching Telluride in early July. They stayed first at the Skyline Ranch, then moved to Valley View Court in the town he described as “a damp, unfrequented, but very spectacular cul-de-sac (which a prodigious rainbow straddled every evening).” In his verse novel, Pale Fire, Nabokov coined a word “iridule,” which Vera later said referred to this Telluride rainbow. (Nabokov was adept at creating new words and invented the term “nymphet” for Lolita.) Despite frequent spells of rainy weather, the Nabokovs took every opportunity to hike up in the mountains in search of the elusive female. Once or twice, they hired a local man, Homer Reid, to take them up in his Jeep. Nabokov later wrote about the “impeccable blue” sky they had every morning, how the “cloudlets” moved in, followed by the “[b]igger fellows with darker bellies,” and the “most irritatingly close lightning I have ever encountered anywhere in the Rockies.” In the evenings and on bad weather days, he worked on Lolita in their motel room. summer/fall 2012