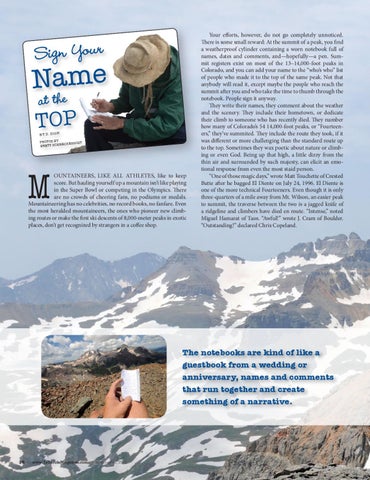 OUNTAINEERS, LIKE ALL ATHLETES, like to keep score. But hauling yourself up a mountain isn’t like playing in the Super Bowl or competing in the Olympics. There are no crowds of cheering fans, no podiums or medals. Mountaineering has no celebrities, no record books, no fanfare. Even the most heralded mountaineers, the ones who pioneer new climbing routes or make the first ski descents of 8,000-meter peaks in exotic places, don’t get recognized by strangers in a coffee shop.

Your efforts, however, do not go completely unnoticed. There is some small reward: At the summit of a peak, you find a weatherproof cylinder containing a worn notebook full of names, dates and comments, and—hopefully—a pen. Summit registers exist on most of the 13–14,000-foot peaks in Colorado, and you can add your name to the “who’s who” list of people who made it to the top of the same peak. Not that anybody will read it, except maybe the people who reach the summit after you and who take the time to thumb through the notebook. People sign it anyway. They write their names, they comment about the weather and the scenery. They include their hometown, or dedicate their climb to someone who has recently died. They number how many of Colorado’s 54 14,000-foot peaks, or “Fourteeners,” they’ve summited. They include the route they took, if it was different or more challenging than the standard route up to the top. Sometimes they wax poetic about nature or climbing or even God. Being up that high, a little dizzy from the thin air and surrounded by such majesty, can elicit an emotional response from even the most staid person. “One of those magic days,” wrote Matt Touchette of Crested Butte after he bagged El Diente on July 24, 1996. El Diente is one of the more technical Fourteeners. Even though it is only three-quarters of a mile away from Mt. Wilson, an easier peak to summit, the traverse between the two is a jagged knife of a ridgeline and climbers have died en route. “Intense,” noted Miguel Hamarat of Taos. “Awful!” wrote J. Cram of Boulder. “Outstanding!” declared Chris Copeland.

The notebooks are kind of like a guestbook from a wedding or anniversary, names and comments that run together and create something of a narrative.