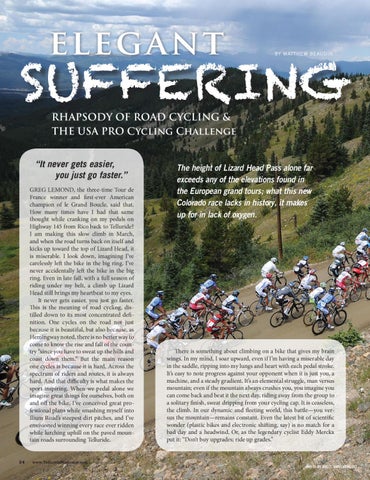 “It never gets easier, you just go faster.” GREG LEMOND, the three-time Tour de France winner and first-ever American champion of le Grand Boucle, said that. How many times have I had that same thought while cranking on my pedals on Highway 145 from Rico back to Telluride? I am making this slow climb in March, and when the road turns back on itself and kicks up toward the top of Lizard Head, it is miserable. I look down, imagining I’ve carelessly left the bike in the big ring. I’ve never accidentally left the bike in the big ring. Even in late fall, with a full season of riding under my belt, a climb up Lizard Head still brings my heartbeat to my eyes. It never gets easier, you just go faster. This is the meaning of road cycling, distilled down to its most concentrated definition. One cycles on the road not just because it is beautiful, but also because, as Hemingway noted, there is no better way to come to know the rise and fall of the country “since you have to sweat up the hills and coast down them.” But the main reason one cycles is because it is hard. Across the spectrum of riders and routes, it is always hard. And that difficulty is what makes the sport inspiring. When we pedal alone we imagine great things for ourselves, both on and off the bike. I’ve conceived great professional plans while smashing myself into Ilium Road’s steepest dirt pitches, and I’ve envisioned winning every race ever ridden while lurching uphill on the paved mountain roads surrounding Telluride.

The height of Lizard Head Pass alone far exceeds any of the elevations found in the European grand tours; what this new Colorado race lacks in history, it makes up for in lack of oxygen.

There is something about climbing on a bike that gives my brain wings. In my mind, I soar upward, even if I’m having a miserable day in the saddle, ripping into my lungs and heart with each pedal stroke. It’s easy to note progress against your opponent when it is just you, a machine, and a steady gradient. It’s an elemental struggle, man versus mountain; even if the mountain always crushes you, you imagine you can come back and beat it the next day, riding away from the group to a solitary finish, sweat dripping from your cycling cap. It is ceaseless, the climb. In our dynamic and fleeting world, this battle—you versus the mountain—remains constant. Even the latest bit of scientific wonder (plastic bikes and electronic shifting, say) is no match for a bad day and a headwind. Or, as the legendary cyclist Eddy Merckx put it: “Don’t buy upgrades; ride up grades.”