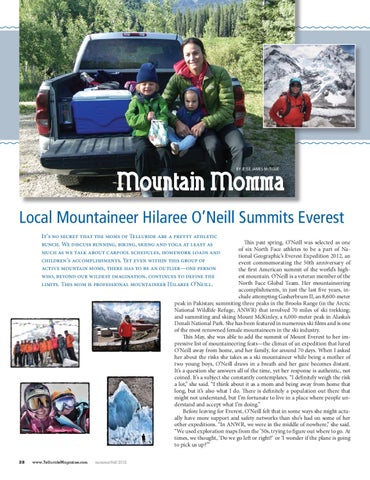 Local Mountaineer Hilaree O’Neill Summits Everest It’s no secret that the moms of Telluride are a pretty athletic bunch. We discuss running, biking, skiing and yoga at least as much as we talk about carpool schedules, homework loads and children’s accomplishments. Yet even within this group of active mountain moms, there has to be an outlier—one person who, beyond our wildest imagination, continues to define the limits. This mom is professional mountaineer Hilaree O’Neill.

This past spring, O’Neill was selected as one of six North Face athletes to be a part of National Geographic’s Everest Expedition 2012, an event commemorating the 50th anniversary of the first American summit of the world’s highest mountain. O’Neill is a veteran member of the North Face Global Team. Her mountaineering accomplishments, in just the last five years, include attempting Gasherbrum II, an 8,600-meter peak in Pakistan; summiting three peaks in the Brooks Range (in the Arctic National Wildlife Refuge, ANWR) that involved 70 miles of ski trekking; and summiting and skiing Mount McKinley, a 6,000-meter peak in Alaska’s Denali National Park. She has been featured in numerous ski films and is one of the most renowned female mountaineers in the ski industry. This May, she was able to add the summit of Mount Everest to her impressive list of mountaineering feats—the climax of an expedition that lured O’Neill away from home, and her family, for around 70 days. When I asked her about the risks she takes as a ski mountaineer while being a mother of two young boys, O’Neill draws in a breath and her gaze becomes distant. It’s a question she answers all of the time, yet her response is authentic, not coined. It’s a subject she constantly contemplates. “I definitely weigh the risk a lot,” she said. “I think about it as a mom and being away from home that long, but it’s also what I do. There is definitely a population out there that might not understand, but I’m fortunate to live in a place where people understand and accept what I’m doing.” Before leaving for Everest, O’Neill felt that in some ways she might actually have more support and safety networks than she’s had on some of her other expeditions. “In ANWR, we were in the middle of nowhere,” she said. “We used exploration maps from the ’50s, trying to figure out where to go. At times, we thought, ‘Do we go left or right?’ or ‘I wonder if the plane is going to pick us up?’”