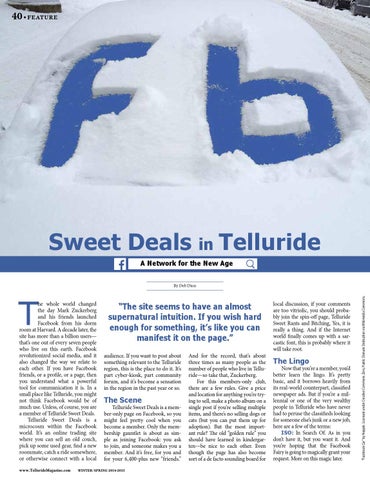 Picaya is the ideal environment to furnish any home or find the perfect gift for every occasion.

audience. If you want to post about something relevant to the Telluride region, this is the place to do it. It’s part cyber-kiosk, part community forum, and it’s become a sensation in the region in the past year or so.

Telluride Sweet Deals is a member-only page on Facebook, so you might feel pretty cool when you become a member. Only the membership gauntlet is about as simple as joining Facebook: you ask to join, and someone makes you a member. And it’s free, for you and for your 6,400-plus new “friends.”

And for the record, that’s about three times as many people as the number of people who live in Telluride—so take that, Zuckerberg. For this members-only club, there are a few rules. Give a price and location for anything you’re trying to sell, make a photo album on a single post if you’re selling multiple items, and there’s no selling dogs or cats (but you can put them up for adoption). But the most important rule? The old “golden rule” you should have learned in kindergarten—be nice to each other. Even though the page has also become sort of a de facto sounding board for

local discussion, if your comments are too vitriolic, you should probably join the spin-off page, Telluride Sweet Rants and Bitching, Yes, it is really a thing. And if the Internet world finally comes up with a sarcastic font, this is probably where it will take root.

Now that you’re a member, you’d better learn the lingo. It’s pretty basic, and it borrows heavily from its real-world counterpart, classified newspaper ads. But if you’re a millennial or one of the very wealthy people in Telluride who have never had to peruse the classifieds looking for someone else’s junk or a new job, here are a few of the terms: ISO: In Search Of. As in you don’t have it, but you want it. And you’re hoping that the Facebook Fairy is going to magically grant your request. More on this magic later.

“The site seems to have an almost supernatural intuition. If you wish hard enough for something, it’s like you can manifest it on the page.”

A Network for the New Age

he whole world changed the day Mark Zuckerberg and his friends launched Facebook from his dorm room at Harvard. A decade later, the site has more than a billion users— that’s one out of every seven people who live on this earth. Facebook revolutionized social media, and it also changed the way we relate to each other. If you have Facebook friends, or a profile, or a page, then you understand what a powerful tool for communication it is. In a small place like Telluride, you might not think Facebook would be of much use. Unless, of course, you are a member of Telluride Sweet Deals. Telluride Sweet Deals is a microcosm within the Facebook world. It’s an online trading site where you can sell an old couch, pick up some used gear, find a new roommate, catch a ride somewhere, or otherwise connect with a local

Time is precious, spend it wisely.