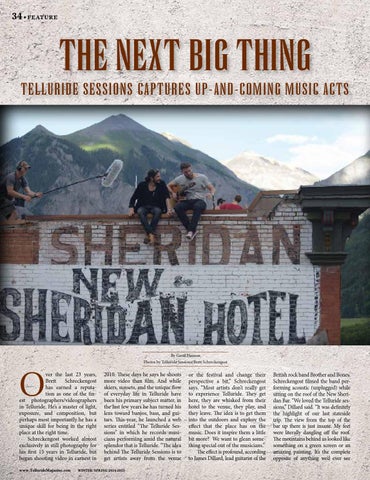 back in London, so we were all just digging it. It’s rare that we actually get to enjoy our surroundings rather than the usual routine of travel, set up, play, go to a new town, and repeat. And we hold Telluride very dear to our hearts.” An experience with the English folk rock band Mumford & Sons inspired The Telluride Sessions. The band came to the Telluride Bluegrass Festival as an unknown quantity in 2011, and Schreckengost met the musicians while shooting pool at the New Sheridan Bar. He was already knocked out by their music, and bonded with the members of the band. A year later Mumford & Sons returned to Telluride, but this time as Grammy Award-winning stars. Schreckengost was hired by Rolling Stone magazine to scout locations for a photo shoot during the bluegrass festival. The crew decided to shoot at Alta Lakes. “The band played four songs while we photographed them,” Schreckengost recalls. “But the band was so big by then that the record label wouldn’t let us use the music. I thought, ‘Wouldn’t it be great to shoot bands in places like Alta Lakes and be able to record the songs.’ And I also thought, ‘Man, I wish I had done this last year…before they were stars.’” A few seasons passed and Schreckengost’s own star had risen as well. His video work was starting to gain recognition on Vimeo and other social channels, and he had better equipment and superior microphones. He decided to duplicate the Mumford & Sons experience with other bands; and thus The

“It’s not a music video. We shoot live music performances. That spontaneity, the music itself, and the imagery are a powerful combination.”

ver the last 23 years, Brett Schreckengost has earned a reputation as one of the finest photographers/videographers in Telluride. He’s a master of light, exposure, and composition, but perhaps most importantly he has a unique skill for being in the right place at the right time. Schreckengost worked almost exclusively in still photography for his first 15 years in Telluride, but began shooting video in earnest in www.TellurideMagazine.com

2010. These days he says he shoots more video than film. And while skiers, sunsets, and the unique flow of everyday life in Telluride have been his primary subject matter, in the last few years he has turned his lens toward banjos, bass, and guitars. This year, he launched a web series entitled “The Telluride Sessions” in which he records musicians performing amid the natural splendor that is Telluride. “The idea behind The Telluride Sessions is to get artists away from the venue

or the festival and change their perspective a bit,” Schreckengost says. “Most artists don’t really get to experience Telluride. They get here, they are whisked from their hotel to the venue, they play, and they leave. The idea is to get them into the outdoors and explore the effect that the place has on the music. Does it inspire them a little bit more? We want to glean something special out of the musicians.” The effect is profound, according to James Dillard, lead guitarist of the

British rock band Brother and Bones. Schreckengost filmed the band performing acoustic (unplugged) while sitting on the roof of the New Sheridan Bar. “We loved the Telluride sessions,” Dillard said. “It was definitely the highlight of our last stateside trip. The view from the top of the bar up there is just insane. My feet were literally dangling off the roof. The mountains behind us looked like something on a green screen or an amazing painting. It’s the complete opposite of anything we’d ever see

Telluride Sessions were born. Since January, Schreckengost and his team have shot Elephant Revival, Birds of Chicago, Front Country (winner of the Telluride Bluegrass Festival Band Contest), Brother and Bones, Amy Helm and the Handsome Strangers, The Wood Brothers, and Headed for the Hills. And while you may not have heard of some of those bands, that is part of the strategy. The videos give the bands some exposure as they ascend to fame, and the bands and their existing fans give some exposure to Telluride and its thriving music scene. “The Mumford experience crystallized the fact that Telluride gets a lot of bands before they get big,” Schreckengost says. “All of these bands are incredibly talented and having these relationships can be really helpful, particularly when it comes to licensing songs for my own work.” The action sports camera company GoPro was so impressed by Schreckengost’s concept that they formed a partnership with him that provided him with an arsenal of twenty GoPro Cameras. Schreckengost put the cameras to work Memorial Day weekend when he shot the Telluride Brews and Blues Festival “Blues Train,” that traveled from Durango to Silverton with twelve blues bands performing on board. He also shot several acts at the Telluride Bluegrass Festival, including Béla Fleck and the Colorado Symphony. When asked what makes the Telluride Sessions so special, Schreckengost said, “We work with a small crew and try and work quickly. I couldn’t do it without Barrett Miller (sound), Don Hannah (second camera) and Mark Steele (production assistant). It’s not a music video. We shoot live music performances. That spontaneity, the music itself, and the imagery are a powerful combination. The content is both good for the band and good for Telluride.” The Telluride Sessions can be seen on Schreckengost’s Vimeo page: vimeo.com/brettschreck. Make sure you have ample time because the music, the mountains, and the magic of Schreckengost’s work is an experience for the eyes and the ears. \ WINTER/SPRING 2014-2015