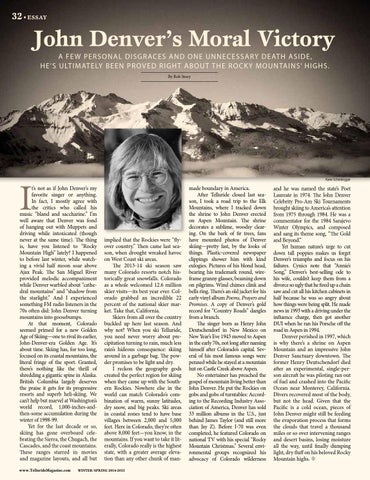 t’s not as if John Denver’s my favorite singer or anything. In fact, I mostly agree with the critics who called his music “bland and saccharine.” I’m well aware that Denver was fond of hanging out with Muppets and driving while intoxicated (though never at the same time). The thing is, have you listened to “Rocky Mountain High” lately? I happened to before last winter, while watching a vivid half moon soar above Ajax Peak. The San Miguel River provided melodic accompaniment while Denver warbled about “cathedral mountains” and “shadow from the starlight.” And I experienced something FM radio listeners in the 70s often did: John Denver turning mountains into goosebumps. At that moment, Colorado seemed primed for a new Golden Age of Skiing—one to rival its earlier, John-Denver-era Golden Age. It’s about time. Skiing has, for too long, focused on its coastal mountains, the literal fringe of the sport. Granted, there’s nothing like the thrill of shredding a gigantic spine in Alaska. British Columbia largely deserves the praise it gets for its progressive resorts and superb heli-skiing. We can’t help but marvel at Washington’s world record, 1,000-inches-andthen-some accumulation during the winter of 1998-99. Yet for the last decade or so, skiing has gone overboard celebrating the Sierra, the Chugach, the Cascades, and the coast mountains. These ranges starred in movies and magazine layouts, and all but

implied that the Rockies were “flyover country.” Then came last season, when drought wreaked havoc on West Coast ski areas. The 2013-14 ski season saw many Colorado resorts notch historically great snowfalls. Colorado as a whole welcomed 12.6 million skier visits—its best year ever. Colorado grabbed an incredible 22 percent of the national skier market. Take that, California. Skiers from all over the country buckled up here last season. And why not? When you ski Telluride, you need never worry about precipitation turning to rain, much less rain’s hideous consequence: skiing around in a garbage bag. The powder promises to be light and dry. I reckon the geography gods created the perfect region for skiing when they came up with the Southern Rockies. Nowhere else in the world can match Colorado’s combination of warm, sunny latitudes, dry snow, and big peaks. Ski areas in coastal zones tend to have base villages between 2,000 and 5,000 feet. Here in Colorado, they’re often above 8,000 feet—you know, in the mountains. If you want to take it literally, Colorado really is the highest state, with a greater average elevation than any other chunk of man-

made boundary in America. After Telluride closed last season, I took a road trip to the Elk Mountains, where I tracked down the shrine to John Denver erected on Aspen Mountain. The shrine decorates a sublime, woodsy clearing. On the bark of fir trees, fans have mounted photos of Denver skiing—pretty fast, by the looks of things. Plastic-covered newspaper clippings shower him with kind eulogies. Pictures of his blond head, bearing his trademark round, wireframe granny glasses, beaming down on pilgrims. Wind chimes clink and bells ring. There’s an old jacket for his early vinyl album Poems, Prayers and Promises. A copy of Denver’s gold record for “Country Roads” dangles from a branch. The singer born as Henry John Deutschendorf in New Mexico on New Year’s Eve 1943 moved to Aspen in the early 70s, not long after naming himself after Colorado’s capital. Several of his most famous songs were penned while he stayed at a mountain hut on Castle Creek above Aspen. No entertainer has preached the gospel of mountain living better than John Denver. He put the Rockies on gobs and gobs of turntables: According to the Recording Industry Association of America, Denver has sold 33 million albums in the U.S., just behind James Taylor (and still more than Jay Z). Before I-70 was even completed, he featured Colorado on national TV with his special “Rocky Mountain Christmas.” Several environmental groups recognized his advocacy of Colorado wilderness

and he was named the state’s Poet Laureate in 1974. The John Denver Celebrity Pro-Am Ski Tournaments brought skiing to America’s attention from 1975 through 1984. He was a commentator for the 1984 Sarajevo Winter Olympics, and composed and sang its theme song, “The Gold and Beyond.” Yet human nature’s urge to cut down tall poppies makes us forget Denver’s triumphs and focus on his failures. Cynics note that “Annie’s Song,” Denver’s best-selling ode to his wife, couldn’t keep them from a divorce so ugly that he fired up a chain saw and cut all his kitchen cabinets in half because he was so angry about how things were being split. He made news in 1993 with a driving under the influence charge, then got another DUI when he ran his Porsche off the road in Aspen in 1994. Denver perished in 1997, which is why there’s a shrine on Aspen Mountain and an impressive John Denver Sanctuary downtown. The former Henry Deutschendorf died after an experimental, single-person aircraft he was piloting ran out of fuel and crashed into the Pacific Ocean near Monterey, California. Divers recovered most of the body, but not the head. Given that the Pacific is a cold ocean, pieces of John Denver might still be feeding the evaporation process that forms the clouds that travel a thousand miles or so over intervening ranges and desert basins, losing moisture all the way, until finally dumping light, dry fluff on his beloved Rocky Mountain highs. \

Just give us a call. We will handle the entire situation.