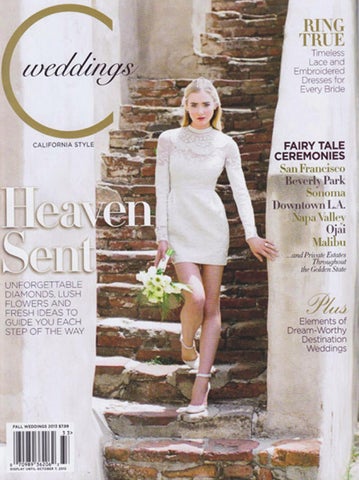 LovelyVintage AMID A MENAGERIE OF ANTIQUES AND GREENERY, HILARY REINIS AND ARTHUR SHERMAN STEP INTO THE FUTURE

The bride in Lanvin; boutonniere by JL Designs. OPPOSITE Botanicals and florals adorned the treasures at Big Daddyâ&#x20AC;&#x2122;s Antiques.

clockwise Lanvin shoes. Jon Shook of Animal catered the event. Old Fashioneds, Whiskey Sours and Manhattans rounded out the bourbon bar; the groom’s sister, who lives in Chile, had just had a baby and could not attend, so Malbec was served in her honor. OPPOSITE A toast to the newlyweds.

ilary Reinis and Arthur Sherman grew up half a mile from each other in Brentwood, but it wasn’t until they attended a friend’s 2009 birthday party that they officially met. “It turned out we had many mutual friends and probably crossed paths in high school,” says Hilary. After a 15-month engagement and no luck finding the perfect venue for their 225-person guest list, the couple stumbled upon Big Daddy’s Antiques on La Cienega Boulevard. “I knew immediately,” recalls Hilary. “Every time Arthur and I walked into the warehouse, we became giddy, and the owner, Shane Brown, was willing to let us be the first people to hold a wedding there.” Not only did Brown give the green light for the celebration, but he also built walls, painted the dance floor and let them redesign the space with the help of Robin Baab and Sarah Tivel of Gather Events. Coming from tightly-knit families, the couple felt strongly about incorporating their brothers, sisters, in-laws, nieces, nephews and parents (28 in total) in the wedding party. Hilary’s eldest brother, an artist, designed the chuppah under which she and Arthur exchanged vows. A graphic artist for TOMS, Hilary designed the invitation suites herself, but when it came to the evening’s menu, Arthur stepped in. A manager on the opening team of the new Water Grill in Santa Monica, he was “very involved” in the food selection. Jon Shook of Animal restaurant cooked at the wedding, and the groom’s favorite sandwiches from Bay Cities in Santa Monica appeared as a late-night snack. “We had a bourbon bar and three specialty cocktails that we created with the bar director at Animal,” adds Hilary. Before departing for their Park City honeymoon, the newlyweds spent their first night as husband and wife at the Hotel Bel-Air. • Venue Big Daddy’s Antiques cake Sweet Lady Jane menu Animal Catering dress Lanvin florist JL Designs rings Neil Lane Jewelry entertainment The Flashdance, West Coast Music planner Gather Events rentals Classic Party Rentals, Found Vintage Rentals, Big Daddy’s Antiques stationery Hilary Reinis, Copper Willow Paper Studio videography Nicholas Andrew Films honeymoon Park City