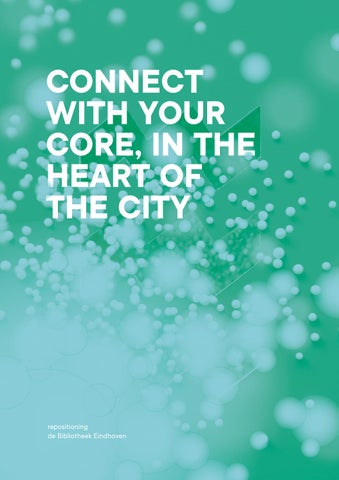 CONNECT WITH YOUR CORE, IN THE HEART OF THE CITY

The publication of this bid book is another major step in our quest for a meaningful role for the library for the city of Eindhoven. A search in the spirit of Eindhoven: a city which has repeatedly reinvented itself and which has always created a new future, reached further, ventured further, and never failed to get there. Our quest has not always been an easy task; even today, the reality is that a library is all too often seen as a building full of books. Over the next 10 years, Eindhoven will undergo a huge transformation. In parallel with this transformation, the library will be given a bigger, meaningful role for the city. We plan to realize this together with the people of our city. Through collaboration and shared experimentation. WeÂ invite you to get involved. This book sets out our course. Harnessing the wind, riding the wave.

The library is an indispensable part of our society. Yet, given the speed and dynamism with which the world and our society are changing, institutions like the library are having to reconsider themselves and their reason for existence. This calls for a clear vision, flexibility and courage. From a detailed analysis of the many trend reports, our current zeitgeist can be summarized in four major developments:

INFORMATION APOCALYPSE We live in an era in which, partly due to the advent of the Internet and digitalization, huge amounts of information are accessible to everyone. A veritable tsunami of information that no one is able to process. The wave of information grows by the day; we need to find a way to manage the advantages and disadvantages of this development.

HYPERREFLEXIVITY With the emergence of mobile applications, nowadays anyone can give their opinion about anything. Any time, any place, anywhere. And, whatever you do, you can expect a reaction. Sometimes personally, sometimes publicly, sometimes anonymously. With good or not-so-good intentions. This demands a lot from our resilience and our ability to put things into perspective. It makes our world more transparent, but also more complex.

DEVALUATION OF KNOWLEDGE AND TRUTH With the democratization of information, it has become difficult to verify sources. What is genuine, what has been manipulated? Objectivity is under pressure due to underlying interests. The consequence is that we are faced with unreliable information, which is increasingly hard to substantiate. This makes it more difficult to differentiate fact from fiction.

EXPLOSION IN COMMUNICATION TECHNOLOGY People are connected with one another more than ever before, via increasing numbers of channels. This influences our social behaviour, both online and offline. How can we manage this in a responsible way, both for ourselves and for those around us?

Democratization of information and knowledge.

‘Internet of Things’: Everyday objects become an entity on the Internet. They can communicate with people and other objects, and make autonomous decisions on the basis of this communication.

Knowledge is increasingly generated within online communities, leading to distortion of reality.

De-institutionalization of knowledge and wisdom: absence of custodians of information and wisdom.

Acceleration in communication technology: many people get left behind.

Hyper-reflexivity: everyone reacts to one another.

Ageing population: large groups of older people at risk of being left behind in an information society.

In the current knowledge economy, information/ knowledge determines whether or not people participate.

‘Survival of the fittest’ in a hyper-materialistic, individualistic and competitive society.

A person’s ability to engage on a social/ intellectual level determines whether or not they participate in society.

SELF-RELIANCE IS ESSENTIAL IN THE INDIVIDUALIZED SOCIETY

In this information society, people can run into difficulties because they are overwhelmed with information, some of it conflicting, that is hard to verify. For some people, this actually leads to less self-reliance, while this is so essential to be able to keep up with the rapid developments. In response to this, libraries are reformulating their mission and positioning.

SHIFT IN ROLE From the collection of knowledge to the unlocking and sharing of knowledge.

CHANGE IN ETHOS From a reactive institution to an inspiring institution.

BROADENING OF THE MISSION Development of human potential and preservation of knowledge.

LocHal in Tilburg (NL): a place for all the citizens of Tilburg, where they can discover and develop their talents.

THE IDENTITY OF THE CITY IS CONTINUALLY EVOLVING -0 D  ue to its young, industrial character the city feels extremely mouldable, dynamic and raw. -0 New area developments such as Strijp S and VDMA.

THE ECONOMY OF EINDHOVEN IS GROWING FASTER THAN THE NATIONAL ECONOMY -0 U  nemployment in the municipality has fallen. -0 Higher average disposable income.

EINDHOVEN IS A GROWING CITY -0 Increasing number of inhabitants and visitors from outside the city. -0 A rising population density leads to a busier and busier city.

In response to these developments, the library must claim a proactive role in the city, thereby becoming a driving force in the development of its citizens.

Hanna Harris – director Archinfo Finland and Mind-building’s commissioner. ‘The Borrowers: Why Finland’s Cities are Havens for Library Lovers’, The Guardian, May 15th 2018.

Eindhoven is by definition a city of transformation. It is a young city in constant flux, which is not afraid to reinvent itself. Collaboration is the norm here and occurs at lightning speed. Creativity and logic are the two poles which continually attract, stimulate and strengthen one another. Through this, a process of continuous renewal takes place.

POSITIONING OF CITY AND LIBRARY:

The positioning and identity of Eindhoven is based on the archetype of the Magician. The Magician brings about transformation by forging unique connections, for example between technology, design and knowledge. In the new vision* of de Bibliotheek Eindhoven, alignment is sought with the positioning and the archetype of Eindhoven, whereby the library and the city reinforce one another.

In the past, too much emphasis was placed on the archetypes Caregiver and Citizen, where the love of reading and social support are key. These principles are not being abandoned, but in the new positioning they are given a different meaning and value.

EINDHOVEN ENERGY THAT LEADS TO TRANSFORMATION

People transform into autonomous individuals, who think for themselves and know what they want.

PEOPLE WHO CONNECT WITH THEIR CORE

CONNEC WITH YO CORE, IN HEART O THE CITY

CT OUR N THE OF Y

THE CITY TRANSFORMS THE LIBRARY

As a citizen, you influence the city in various ways, consciously and unconsciously, for instance by living, working and enjoying your leisure time there. The city moulds itself to the people and responds by providing public functions. All initiatives, big or small, enrich the city and its citizens.

The library connects energies within the city, enriches and gives direction to new energies. With a central and prominent place in the city.

The library transfers the progress and resilience of Eindhoven to the city’s citizens. This new role is put into effect by linking it with four defining energies that are central to the new programme and setup: inspire, experience, explore and share. When you visit the library for one of the four energies, the other three will be assimilated automatically.

ROLE …own role for target group or environment

The library will distinguish itself for its value and role in Eindhoven, because it believes in the universal values autonomy and self-reliance and it is the library’s role to bring about the transformation of the city’s citizens.

EXPERIENCE: WE ENABLE PEOPLE TO DISCOVER AND EXPERIENCE FOR THEMSELVES.

EXPLORE: WE OFFER FOCUS AND SPECIALIZATION

Whatever your reason for visiting, in the library your thoughts, questions and insights gain direction. The four different energies contribute towards transformation and bring you closer to your core. You receive answers to your questions and are motivated to ask new ones. Here you are given every opportunity to enrich yourself socially, intellectually, emotionally and societally. The library is accessible to everyone. It is a house with open doors, located in the heart of the city.

FLEXIBLE SPACES IN THE CITY

The structuring of the preliminary research, the interviews and the trend reports resulted in twelve building blocks. Divided across four levels of development, these are the functions that the library must provide if it wants to meet the needs of the citizens of and visitors to Eindhoven. These building blocks are central to everything that the library undertakes andÂ provides.

THE BUILDING ITSELF EMANATES, RIGHT DOWN TO THE DETAIL, THE BELIEF IN TRANSFORMATION. A BEACON OF FAITH IN AUTONOMY AND SELF-RELIANCE.

THE BUILDING IS OPEN TO EVERYONE, AND EVERYONE IS EAGER TO VISIT. THE MANY FUNCTIONS AND FACILITIES ATTRACT A DIVERSE RANGE OF PEOPLE, WHO WILL GET TO KNOW ONE ANOTHER IN A SPONTANEOUS WAY.

FLEXIBLE SPACES IN THE CITY:

SOCIETY IS CHANGING AT AN EVER-INCREASING PACE. THE LIBRARY MUST RESPOND TO THIS, ALSO GEOGRAPHICALLY. IF IT IS NEEDED SOMEWHERE, IT SHOULD BE THERE. NOT ONLY DIGITALLY, BUT ALSO PHYSICALLY.

STORIES FROM, ABOUT AND FOR THE CITY ARE INTERPRETED HERE IN NUMEROUS WAYS. DISCUSSIONS ARE HELD AND VISIONS AND OPINIONS EXCHANGED. EVERYONE CAN AND MAY PARTICIPATE.

HERE YOU CAN STRENGTHEN YOUR NETWORK AND WORK TOGETHER ON SOLUTIONS. A DIVERSE RANGE OF FACILITIES ENCOURAGES MUTUAL COLLABORATION.

HERE YOU CAN FIND ALL KINDS OF INFORMATION, PHYSICALLY AND DIGITALLY, WITH THE ACCOMPANYING SERVICE. THE TRADITIONAL ROLE OF THE LIBRARY, TARGETED TOWARDS THE NEEDS OF TODAY.

AN INDISPENSABLE ELEMENT IN THE GROWING KNOWLEDGE ECONOMY AND AN IMPORTANT SERVICE FOR THE MANY FREELANCERS, STUDENTS AND TEACHERS; A KNOWLEDGE HUB FOR EINDHOVEN.

de Bibliotheek Eindhoven took to the streets with a campaign team, to ask the citizens of Eindhoven what their ideal library would look like. Take a look at the results on mijnbieb040.nl.

AMPLE SPACE FOR RESEARCH, EXPERIMENTATION AND EXPERIENCE. HERE YOU CAN ENRICH YOUR KNOWLEDGE BY EXPLORING A VARIETY OF TOPICS IN A FUN AND INNOVATIVE WAY.

THE BEATING HEART OF EINDHOVEN – FOR ITS MANY DIVERSE CITIZENS AND VISITORS FROM EVERY CORNER OF THE WORLD. HERE PEOPLE MEET AND GET TO KNOW ONE ANOTHER (BETTER).

WE BRING AREAS OF EXPERTISE TOGETHER TO MAKE THEMES ACCESSIBLE. FOR THIS, WE WORK TOGETHER WITH OTHERS.

WE OFFER DEPTH OF KNOWLEDGE AND INFORMATION.

WE GIVE PEOPLE THE OPPORTUNITY FOR CONTINUOUS SELF-DEVELOPMENT, THEREBY FOSTERING SELF-RELIANCE AND SELF-ACTUALIZATION.

THE FOUR ENERGIES REALIZE A TRANSFORMATION AMONG THE CITY’S CITIZENS AND, TOGETHER WITH THE TWELVE FUNCTIONS, ARE CENTRAL TO THE PROGRAMME AND DESIGN.

CONNECT WITH YOUR CORE, INÂ THE HEART OF THE CITY

The insights and conclusions in this document are based on extensive research: 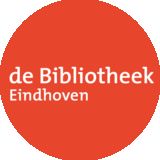 Connect with your core, in the hart of the city. (Repositioning de Bibliotheek Eindhoven)

The publication of this bid book is another major step in our quest for a meaningful role for the library for the city of Eindhoven.

Connect with your core, in the hart of the city. (Repositioning de Bibliotheek Eindhoven)

The publication of this bid book is another major step in our quest for a meaningful role for the library for the city of Eindhoven.