Authentic Christianity The baptism on the day of Pentacost Acts 2 1.

Not only the apostles performed Baptism

Baptism is a public testimony of a personal decision.

After baptism there is still a need of study of the Word.

Receiving of the Holy Spirit is not a separate water Baptism.

Nothing stands in the way for baptism, when a person who have accepted Christ asks for baptism.

All believers, who deliver the message, have also the right to baptise the candidate.

Baptism is into Christ and into a fellowship of believers

FROM THE EDITOR The simple fact is that Christianity is all about Christ, and all christian acts are done in His name. Becoming

a Christian is all about believing in Christ, and receiving His righteousness. Christ alone is called the Door, the Light of Life and the Bread of life. Christ is the author and the nisher of our faith. Christ is so central in all what has to do with biblical religion, because Christ is the Word. All that God have

revealed to fallen man have been revealed through Christ. God cannot prove His justice without Christ the Word made esh. Christ was sealed for that purpose, and our testimony con rms, that God is true.

He who has received His testimony has certi ed that God is true. John. 3:33 By believing that Jesus is the Messiah, the Son of God, life can be received. Not only is Jesus Christ the

The Voice   a speci c magazine for Gods remnant end time people. The Voice independent from any church and political organisations. The Voice based on authentic apostolic thinking and build upon Bible and historical documentation. Brother Torben

bridge back to God, but Jesus is also the life giver.

But these words are written that you may believe that Jesus is the Christ, the Son of God, and that by believing you may have life in His name John 20:31 "whatsoever you do in word or deed, do all in the name of the Lord Jesus, giving thanks to God and the Father by him"

1. Baptised into Christ 2. Baptised in His name 3 Baptised by immersion in water A HISTORY OF THE CHRISTIAN CHURCH Williston Walker, (1947), Pg 58

The Trinitarian baptismal formula … was displacing the older baptism in the name of Christ. THE NEW SCHAFF-HERZOG ENCYCLOPEDIA OF RELIGIOUS KNOWLEDGE(1957), I, 435

The New Testament knows only baptism in the name of Jesus …, which still occurs even in the second and third centuries. ENCYCLOPEDIA BIBLICA (1899), I, 473

It is natural to conclude that baptism was administered in the earliest times ‘in the name of Jesus Christ,’ or in that ‘of the Lord Jesus.’ This view is con rmed by the fact that the earliest forms of the baptismal confession appear to have been single – not triple, as was the later creed. ENCYCLOPEDIA BRITANNICA11TH edition, (1910), Vol 2, Pg 365

The Trinitarian formula and trine immersion were not uniformly used from the beginning… Baptism into the name of the Lord [was] the normal formula of the new Testament. In the 3`rd century baptism in the name of Christ was still so wide spread that Pope Stephen, in opposition to Cyprian of Carthage, declared it to be valid.

A famous Norwegian . verse to verse comment on the whole Bible.

The formula for baptism was changed in the second century

Norsk Bibelverk Vol. 2 p. 291 :The formula for ba . ptism was changed in the second century

The use of a Trinitarian formula of any sort was not suggested in early Church history. Vol 2, Pg 389 Baptism was always in the name of Lord Jesus until the time of Justin Martyr when Triune formula was used. NEW INTERNATIONAL ENCYCLOPEDIA Vol 22, Pg 477 The term “Trinity” was originated by Tertullian, a Roman Catholic Church Father.

A HISTORY OF CHRISTIAN THOUGHT (Otto Heick) (1965), I, 53 At rst baptism was administered in the name of Jesus, but gradually in the name of the Triune God: Father, Son, and Holy Ghost. CANNEY’S ENCYCLOPEDIA OF RELIGIONS (1970), Pg 53

What different Encyclopedias have to say about Water Baptism

AD. 155 St. Justin Martyr ( a philosopher and Christian apologist AD. 100 165) First Apolo y Justin describes in detail the rites of Baptism . This Document shows several facts: 1: Baptism by immersion seems still to be used in the second century. 2. Baptism in the name of Jesus was still in practice, but the trinitarian form was being pushed forward very hard 3. Baptism was looked upon as an illumination, and an act by own choice and knowledge. 4. In the Catholic Encyclopedia, next page, refers to this document as calling upon the trinitarian form as the only valid form.

Vatican document gives the proof who changed the authentic formular. Catholic Cardinal Joseph Ratzinger “The basic form of our (Matthew 28:19 Trinitarian) profession of faith took shape during the course of the second and third centuries in connection with the ceremony of baptism. So far as its place of origin is concerned, the text (Matthew 28:19) came from the city of Rome.” —

St. Justin Martyr, a philosopher and Christian apologist AD. 100-165, writes in 155 that the trinitarian formular is the only valid form of Christian baptism.

As many as are persuaded and believe that what we teach and say is true, and undertake to be able to live accordingly, are instructed to pray and to entreat God with fasting, for the remission of their sins that are past, we praying and fasting with them. Then they are brought by us where there is water, and are regenerated in the same manner in which we were ourselves regenerated. For, in the name of God, the Father and Lord of the universe, and of our Saviour Jesus Christ, and of the Holy Spirit, they then receive the washing with water. And for this [rite] we have learned from the apostles this reason. Since at our birth we were born without our own knowledge or choice, by our parents coming together, and were brought up in bad habits and wicked training; in order that we may not remain the children of necessity and of ignorance, but may become the children of choice and knowledge, and may obtain in the water the remission of

sins formerly committed, there is pronounced over him who chooses to be born

Not with water, but in water

2. Only a single immersion in water,

lieved in the WAY and baptised in

symbolizing that no one else than

water, not with water.

It makes all the di erence ! Water does not purify the recipient from

In water all the way down in the wa-

sin and give salvation.

ter grave to be raised up to put on

The Gospel of Matthew 3:16 relates:

the life of Jesus Christ.

And Jesus, when he was bap-

tised, went up straightway out

raised up with Christ, only to be

ens were opened unto him, and he saw the Spirit of God descending like a dove, and lighting upon him. Colossians 2:12 adds another aspekt to baptism. Buried with him in baptism. 1. Baptism is in water to symbolise the old man dead, and then

raised up with Christ.

My dear children, for whom I am again in the pains of childbirth until Christ is formed in you Galatians 4:19

But these words are written that you may believe that Jesus is the Christ, the Son of God, and that by believing you may have life in His name John 20:31 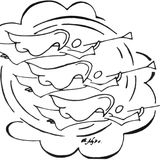 In the years between AD 100 and AD 323 the foundation of Christianity was changed. Sabbath, Baptism and the understanding of the Godhead. I...

In the years between AD 100 and AD 323 the foundation of Christianity was changed. Sabbath, Baptism and the understanding of the Godhead. I...