I root myself in reality: in storytelling, and the contexts it reveals; in memory and history and the ways in which they are intertwined; I am interested in transnationalism and I am committed to love. I have lived in four continents, and in each I have tried to grasp what it meant to find my sense of place. Of the tools at my disposal my favourites are research, conversation, and notebook sketches. I like mythology and maps. I want to learn languages and colloquialisms. I believe that poetry is our utopian marginal resistance.

President’s Scholarship (Admissions average of 90% to 94.9%) University of Waterloo

Rutgers University, concept design for a library and learning center in South Bend, Indiana, and Respectfully, preliminary design work for an arts camp for the Fresh Air Fund in upstate New York.

I found Bianca to be one of the most mature and talented student interns I have mentored over the past 20 years. She joined into and at times led project teams and I came to rely on her to complete a wide variety tasks quickly and accurately, and with the tech savvy of many of her millennial peers. Bianca also has a very pleasant personality and works well in a team environment. I have further been impressed by her seeking out a wide range of work and travel experiences, which will provide Alexander FAIA a goodLamis, basis for her further work. Partner Respectfully,

My 3B academic design studio course was focused on the development of new mining communities and vernacular architectures in Northern subarctic Canada. We began by doing an intensive geographic, programmatic, and infrastructural study of the entire province of Quebec, which indicated that the particular area to which we were assigned would benefit from a “hub” that would close the already-existing matrix of ecological research stakeholders.

Nor th B ay

The master plan of he Renard Research Village leverages the economic resources of the town to extend ecological networks in surrounding research and monitoring stations operated by Cree communities and organizations with interests in forestry, climate change, geology, and water. It is formed on the premise that the town and the mine will change over time. While the town pop-

ulation is projected to be its largest and most varied in the 20-30 year operational life of the mine, its features and infrastructure will be able to support an influx of researchers and Cree specialists in this transition period, eventually allowing the Renard Research Village to take on its second life as a dedicated research center. Throughout this process, a central

research- and community-based “armature” remains at the core. While the metal-clad research blocks provide the facilities and unique programming for visiting researchers, the softer, wooden-clad buildings contain community activities such as dining and entertainment, which build friendships and provide moments of intersection between researcher and miner.

POSSIBLE EXTENSION OF MINE LIFESPAN

Interspersed between these two main â&#x20AC;&#x153;building typesâ&#x20AC;? are more temporary interventions that guide one through the landscape and its significant topography changes, providing shelter, way-finding, and at times, interfaces with the elements of the North. And finally, radiating from the armature of the center, small pre-fabricated bungalows built suitably to the cold climates form a series of neighbourhoods oriented towards the townâ&#x20AC;&#x2122;s core. Section Detail 2: Community dining hall

â&#x20AC;?Although the Arctic and the sub-Arctic winter have many disadvantages, the crisp clean air of spring, the brilliant sun on the snow, the northern lights, are all appreciated as much by northerners as by southerners... Instead of the science fiction city under a dome, other, more subtle, building forms should be devised with sheltered outdoor walkways open to the sky, the sun and the falling snow, interlocked within a system of enclosed, heated and daylit streets for bad weather.â&#x20AC;?

Walking on Water is a riverside lodge and laboratory for the reinsertion of endangered Great Lakes fish species, stuated in Northern Ontario French River Country.Looking to explore the capabilities of the wooden boat dock typology, the project hinges on a network of wooden dock-bridges that spans across the site, bordering along the rocky riverside and connecting the various buildings and their programs. Conceptual Sketches

Section through main lodge and bridges

The bridge network is anchored down on either side by the laboratory and by the main lodge building, which provides rooms for thirty. Along the path, there are two separate bunkies which essentially slide along the bridges, each building divided into two separate areas, one for privacy and one for public gathering. One bunkie is hinged into the rock and the other one floats freely out on the water. At the center of all this is the public fire pit, which sits on the middle-most cliff providing views out to the water and buildings.

Also found on the site are a floating sauna and a more isolated residence for employees. The dock protruding from the laboratory is lined with fish farms. As visitors and residents travel across the bridges, they will experience an ebbing of natural and manmade conditions through the site, as the path guides them along and through ground, out far into the water, under roof tops, and up a cliff to the fire pit.

3A Exchange Studio in Prague (CTU) In Collaboration with Guillaume Bourven Supervised by Atelier Kordovsky-Vrbata On my 3A exchange term at the Czech Technical University, I and a design studio colleague focused on the development of a suburban plot of land south of Prague that is to be the site of a major metro station for the future D-Line in Prague. We were tasked with first laying out an urban-scale scheme including building types, paths, forestry, parks, parking, etc., and then further detailing the most prominent buildings, which in our case were the ones facing the main square connected to the metro station.

The principle of the urban scheme we designed was to bring people into the natural and residential surroundings of the area from the city of Prague which they are leaving via metro. Paths and greenery connect the square to the surrounding

parks and the lake across the road; the existing garden residence radial plan is extended in the upper quadrant of the scheme. The perimeter buildings reflect the character of the prominent hospital block to the south and the housing blocks.

PATHS AND PARKS LOBBY AND RESTO

O.S.P. (Oriented Strand Playscape) was a design-build project that occupied an interstitial space on the perimeter of the School of Architecture building. The installation was conceived with the intention of creating modular 2ft x 2ft x 2ft ‘blocks’ that would be able to stand alone as furniture or storage pieces after the eventual disassembly of the installation, thus prolonging the project’s lifetime and lessening the environmental impact significantly. As a fully assembled installation, the playscape facilitates the experience of walking through a sculpturally articulated canal, and provides spaces for moments of play, climbing, crawling, sitting, and interaction with other people.

As stand-alone modular blocks, the OSP takes on four forms: the space frame, the fully enclosed cube, the slope, and the step. Each of these can facilitate various everyday pastimes such as sitting, reading, eating, meeting with friends, and storage for books or plants.

In Collaboration with F_RMlab Toronto, Ontario

The contemporary city is a space of sensory overload. On this night in particular, crowds emerge to roam amongst a cacophony of stimulation: from imagery and noise, to movement and smell. This project seeks to provide a cushioned media-womb where visitors can reflect in isolation and comfort. CUSHION was installed in the alley next to the Bata Shoe Museum for Nuit Blanche 2016. F_RMlab is a design collective from the University of Waterloo exploring digital fabrication and interactive technology through installations. I assisted in this installation mainly throughout the assembly/ take down, site documentation, and in its promotion through social media channels and distribution of flyers.

Photograph of Installation in action

Robert A.M. Stern Architects (RAMSA) is a large American architecture firm based in New York City. As a practice that places heavy emphasis on the educational and precedent-based aspects of architecture, RAMSA presented me with a great opportunity to further my regional research interests and explore a particular intersection of theory and architectural design. As an intern in Alexander Lamisâ&#x20AC;&#x2122;s studio, I contributed to several institutional projects in concept design over the course of my eight-month internship including the Rutgers University College Avenue precinct plan in New Jersey, the Diamonstein-Spielvogel Arts Center for the non-for-profit Fresh Air Fund in Fishkill, New York, and the St. Joseph County Public Library extension in South Bend, Indiana. I utilised a variety of computer software to produce the necessary presentation materials - Revit, SketchUp, Rhino and AutoCAD.

I was a team member on the Design Development phase of a large residential project on West 22nd Street, which would overlook the Hudson River in New York, and throughout this time was responsible for assessing various brick patterning studies and carefully detailing the materials at the building’s base. I also contributed to rendering post-production and the preparation of presentation materials for clients, project partners, and high-profile developers. Working heavily with Revit as a team, I was quickly integrated into the work processes of BIM collaboration, exporting, etc.

In adition, I assisted with RAMSA’s mass planning and architectural projects in rapidly urbanizing China, including a residential and retail district in Tianjin, China, and a renovation and restoration project to a large convent in New Jersey.

Exterior Render of Building in Context

nkArchitect is a small Toronto-based architecture office with a focus on local boutique residential and commercial projects. In the position of architectural assistant, my contribution to the firm included work across multiple projects ranging from producing exterior and interior renderings for client presentation, building 3D models from existing floor plans and sections, and drawing floor plans based on measurements gathered at site visits. Exterior Render; Elevations as Reference

WORK EXPERIENCE: Drawing Room Drawing Room Architecture is a young architecture firm with a focus on sustainability in small-scale builds. As an architectural assistant, I worked closely with the head archtiect to assist in all things needed to design, document, present, procure and build residential and commercial architecture. I produced drawing sets and renders for a variety of projects including an extension on a house in the Macedon mountain ranges and in the suburb of Brunswick.

My Last Self Portrait Oil on canvas 2016 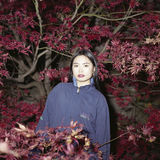