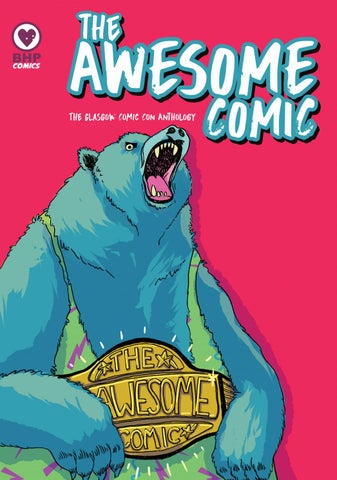 A big thank you to everyone who submitted work for the anthology and the fantastic creators who attend glasgow comic con every year.

The Awesome Comic Designed by Kirsty Hunter &amp; Sha Nazir Cover Art by Kirsty Hunter Edited by Kirsty Hunter First printing 2016 Published in Glasgow by (BHP Comics) Black Hearted Press Ltd. All comics copyright respective creators. All rights reserved. No part of this publication can be reproduced or transmitted, in any form (except short excerpts for review purposes) without the written permission of BHP Comics and creators. Made in Scotland. Printed in Great Britain by Bell &amp; Bain Ltd, Glasgow. Ask your local comic or book shop to stock BHP Comics. Visit BHPcomics.com for more info.

A LONG WAY DOWN, IN GLASGOW’S UNDERGROUND...

It is a period of driverless trains. Rebel neds, strike from hidden places, prowling for victims in Glasgow’s Empire.

THERE MAY BE TROUBLE AHEAD...

WELCOME ABOARD MA’AM. TAKE A SEAT, ENJOY THE FORCE. OH AND HIM? HE’S JUST MISREPRESENTED, YOU’RE IN SAFE HANDS!

...ALL WAS WELL IN GLASGOW’S UNDERGROUND.

SHA NAZIR is an illustrator, designer and publisher who has worked on a diverse range of books from graphic novel, Laptop Guy to his newest book, Comic Invention: The World’s First Comic which accompanies an exhibition at The Hunterian Art Gallery. JACK LOTHIAN is a film and television writer. His television credits range from Ashes to Ashes and Shameless, for which he wrote the final episode, to Outcasts and Teachers, which gained him nominations for Best Writer at the BAFTAs and Best Young Writer at the Broadcast Awards.

CATRIONA LAIRD is a graduate of Duncan of Jordanstone with a passion for storytelling, specifically comics. She was raised on the Beano and the Dandy and developed an interest in graphic novels in her teens. She currently has a short webcomic online and plans for more in the very near future.

Who is actually reading my submissions? - Lucasz Kowalczuk

ZUZANNA DOMINIAK is a published artist and illustrator with a bewitching style. Her work, inspired by the likes of Junji Ito and Daniel Clowes, marries grotesque horror and experimental narrative stories. Zuzanna teaches, collaborates and brings other artists together as an active member of the Edinburgh League of Comics.

CRAIG COLLINS is a writer and cartoonist known for surreal horror comedy books Roachwell and Crawl Hole and experimental supervillian Battle Royale Metrodome, in collaboration with Iain Laurie. In collaboration with Mark Brady, Craig will launch the medieval warfare funfest Medieval Times at GCC2016, alongside an essential Ross Geller Fanzine.

Detective Paws: Chapter 1 - Danielle Banks and Finn LeMarinel (Death Wants Hugs) Death is a smug, lonely, charismatic and outrageously dense octopus who preys on folk that don’t tell stories about detectives who are also labradors. Danielle and Finn aren’t so easily fooled. They do write stories about detectives who are also labradors. They go by the name ‘DEATH WANTS HUGS’. Danielle is an illustrator and Finn is not.

Edinburgh based illustrator, originally from the fens of Cambridgeshire. Enjoys watching re-runs of the crystal maze and contemplating the void. Please feel free to contact for collaborations or commissions or questions.peonygent@hotmail.co.uk / peonygent.tumblr.com

NY ALI graduated with a HND in Illustration and is based in Glasgow. She works in different mediums such as Watercolour, Papercuting and Photoshop. Selling quirky prints, commissions, original papercuts and fanart; she is inspired by everyday life,

cartoons, anime and books. Check out her stuff online @Nytastic.

DEAN VARGA and MOM Comics are the possessors of an omnipotent, comic creating shared consciousness. SCHEMA was created through the process of international collaboration. Fresh to the scene, Dean deals in politics and weirdness equally. MOM is the co-founder of the Los Angeles Womens’ Comics Creators League. Find Dean on Twitter @dean_varga and MOM at www.momcomics.org.

ELL is a rarely seen tea-drinker and comic artist who lives in a small flat in Edinburgh, where she surrounds herself with everything she needs; her laptop and drawing tablet, a bass guitar and several games consoles. And lots of tea.

GARETH is theatre editor of The List, post-graduate student at the University of Glasgow and an idiosyncratic cultural critic who owes his emotional success to Sha Nazir. JESSICA TAYLOR is a freelance illustrator living and working in Glasgow, though originally from New York City. Jessica recently graduated from Glasgow School of Art’s Communication Design Department, where she focused on Illustration.

The extended edition of our Glasgow Comic Con Anthology, jam-packed with over 80 pages of indie comics gems from 33 creators! 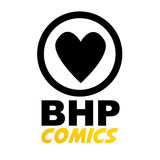