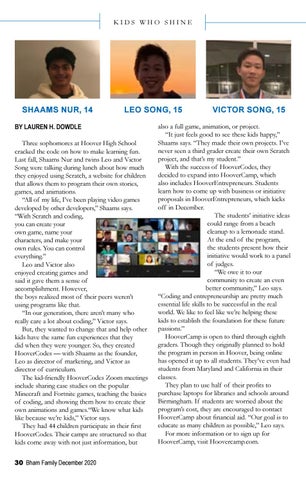 BY LAUREN H. DOWDLE Three sophomores at Hoover High School cracked the code on how to make learning fun. Last fall, Shaams Nur and twins Leo and Victor Song were talking during lunch about how much they enjoyed using Scratch, a website for children that allows them to program their own stories, games, and animations. “All of my life, I’ve been playing video games developed by other developers,” Shaams says. “With Scratch and coding, you can create your own game, name your characters, and make your own rules. You can control everything.” Leo and Victor also enjoyed creating games and said it gave them a sense of accomplishment. However, the boys realized most of their peers weren’t using programs like that. “In our generation, there aren’t many who really care a lot about coding,” Victor says. But, they wanted to change that and help other kids have the same fun experiences that they did when they were younger. So, they created HooverCodes — with Shaams as the founder, Leo as director of marketing, and Victor as director of curriculum. The kid-friendly HooverCodes Zoom meetings include sharing case studies on the popular Minecraft and Fortnite games, teaching the basics of coding, and showing them how to create their own animations and games.“We know what kids like because we’re kids,” Victor says. They had 44 children participate in their first HooverCodes. Their camps are structured so that kids come away with not just information, but 30 Bham Family December 2020

also a full game, animation, or project. “It just feels good to see these kids happy,” Shaams says. “They made their own projects. I’ve never seen a third grader create their own Scratch project, and that’s my student.” With the success of HooverCodes, they decided to expand into HooverCamp, which also includes HooverEntrepreneurs. Students learn how to come up with business or initiative proposals in HooverEntrepreneurs, which kicks off in December. The students’ initiative ideas could range from a beach cleanup to a lemonade stand. At the end of the program, the students present how their initiative would work to a panel of judges. “We owe it to our community to create an even better community,” Leo says. “Coding and entrepreneurship are pretty much essential life skills to be successful in the real world. We like to feel like we’re helping these kids to establish the foundation for these future passions.” HooverCamp is open to third through eighth graders. Though they originally planned to hold the program in person in Hoover, being online has opened it up to all students. They’ve even had students from Maryland and California in their classes. They plan to use half of their profits to purchase laptops for libraries and schools around Birmingham. If students are worried about the program’s cost, they are encouraged to contact HooverCamp about financial aid. “Our goal is to educate as many children as possible,” Leo says. For more information or to sign up for HooverCamp, visit Hoovercamp.com. 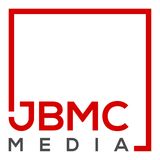