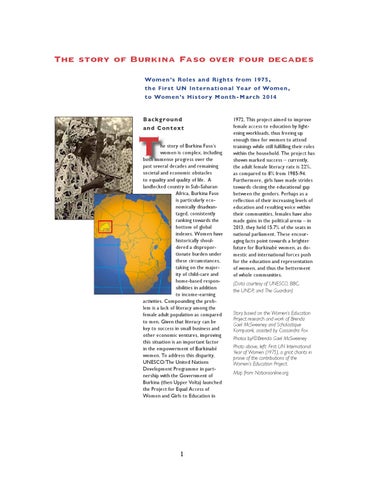 The story of Burkina Faso over four decades Women’s Roles and Rights from 1975, the First UN International Year of Women, to Women’s Histor y Month-March 2014

he story of Burkina Faso’s women is complex, including both immense progress over the past several decades and remaining societal and economic obstacles to equality and quality of life. A landlocked country in Sub-Saharan Africa, Burkina Faso is particularly economically disadvantaged, consistently ranking towards the bottom of global indexes. Women have historically shouldered a disproportionate burden under these circumstances, taking on the majority of child-care and home-based responsibilities in addition to income-earning activities. Compounding the problem is a lack of literacy among the female adult population as compared to men. Given that literacy can be key to success in small business and other economic ventures, improving this situation is an important factor in the empowerment of Burkinabé women. To address this disparity, UNESCO/The United Nations Development Programme in partnership with the Government of Burkina (then Upper Volta) launched the Project for Equal Access of Women and Girls to Education in

1972. This project aimed to improve female access to education by lightening workloads, thus freeing up enough time for women to attend within the household. The project has shown marked success – currently, the adult female literacy rate is 22%, as compared to 8% from 1985-94. Furthermore, girls have made strides towards closing the educational gap between the genders. Perhaps as a education and resulting voice within their communities, females have also made gains in the political arena – in 2013, they held 15.7% of the seats in national parliament. These encouraging facts point towards a brighter future for Burkinabé women, as domestic and international forces push for the education and representation of women, and thus the betterment of whole communities. (Data courtesy of UNESCO, BBC, the UNDP, and The Guardian) The Story of Burkina Faso Over Four Decades

The Story of Burkina Faso Over Four Decades