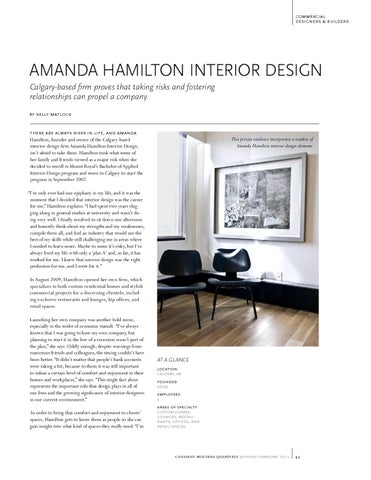 amanda hamilton interior design Calgary-based firm proves that taking risks and fostering relationships can propel a company by kelly matlock there are always risks in life, and amanda Hamilton, founder and owner of the Calgary-based interior-design firm Amanda Hamilton Interior Design, isn’t afraid to take them. Hamilton took what some of her family and friends viewed as a major risk when she decided to enroll in Mount Royal’s Bachelor of Applied Interior Design program and move to Calgary to start the program in September 2002.

“I’ve only ever had one epiphany in my life, and it was the moment that I decided that interior design was the career for me,” Hamilton explains. “I had spent two years slugging along in general studies at university and wasn’t doing very well. I finally resolved to sit down one afternoon and honestly think about my strengths and my weaknesses, compile them all, and find an industry that would use the best of my skills while still challenging me in areas where I needed to learn more. Maybe to some it’s risky, but I’ve always lived my life with only a ‘plan A’ and, so far, it has worked for me. I knew that interior design was the right profession for me, and I went for it.” In August 2009, Hamilton opened her own firm, which specializes in both custom residential homes and stylish commercial projects for a discerning clientele, including exclusive restaurants and lounges, hip offices, and retail spaces. Launching her own company was another bold move, especially in the midst of economic tumult. “I’ve always known that I was going to have my own company, but planning to start it in the low of a recession wasn’t part of the plan,” she says. Oddly enough, despite warnings from numerous friends and colleagues, the timing couldn’t have been better. “It didn’t matter that people’s bank accounts were taking a hit, because to them it was still important to infuse a certain level of comfort and enjoyment in their homes and workplaces,” she says. “This single fact alone represents the important role that design plays in all of our lives and the growing significance of interior designers in our current environment.” In order to bring that comfort and enjoyment to clients’ spaces, Hamilton gets to know them as people so she can gain insight into what kind of spaces they really need. “I’m 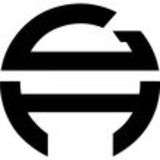