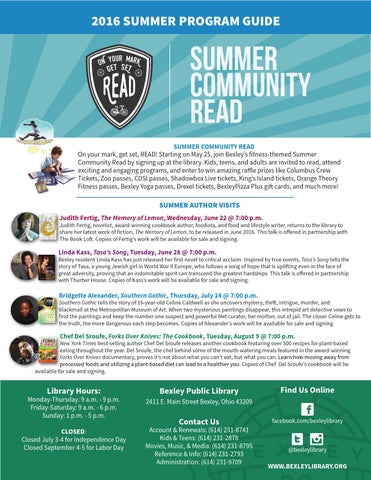 Judith Fertig, novelist, award-winning cookbook author, foodista, and food and lifestyle writer, returns to the library to share her latest work of fiction, The Memory of Lemon, to be released in June 2016. This talk is offered in partnership with The Book Loft. Copies of Fertig’s work will be available for sale and signing.

Bexley resident Linda Kass has just released her first novel to critical acclaim. Inspired by true events, Tasa’s Song tells the story of Tasa, a young Jewish girl in World War II Europe, who follows a song of hope that is uplifting even in the face of great adversity, proving that an indomitable spirit can transcend the greatest hardships. This talk is offered in partnership with Thurber House. Copies of Kass’s work will be available for sale and signing.

Southern Gothic tells the story of 16-year-old Celine Caldwell as she uncovers mystery, theft, intrigue, murder, and blackmail at the Metropolitan Museum of Art. When two mysterious paintings disappear, this intrepid art detective vows to find the paintings and keep the number one suspect and powerful Met curator, her mother, out of jail. The closer Celine gets to the truth, the more dangerous each step becomes. Copies of Alexander’s work will be available for sale and signing.

New York Times best-selling author Chef Del Sroufe releases another cookbook featuring over 300 recipes for plant-based eating throughout the year. Del Sroufe, the chef behind some of the mouth-watering meals featured in the award-winning Forks Over Knives documentary, proves it’s not about what you can’t eat, but what you can. Learn how moving away from processed foods and utilizing a plant-based diet can lead to a healthier you. Copies of Chef Del Sroufe’s cookbook will be available for sale and signing.

There's a lot coming up at Bexley Public Library with the Summer Community Read, great talks by local experts and wonderful concerts by talented musicians. Keep track of what's happening with our Summer Program Guide. 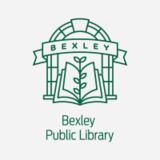