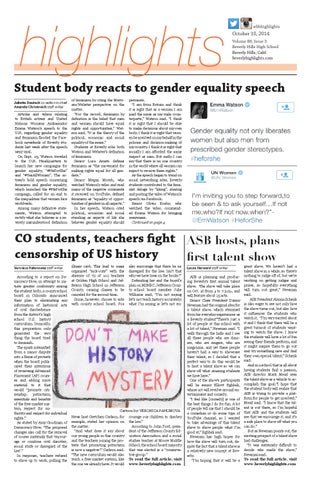 Student body reacts to gender equality speech Juliette Deutsch co-editor-in-chief Amanda Christovich staff writer Articles and videos relating to British actress and United Nations Womens Ambassador Emma Watson’s speech to the U.N. regarding gender equality and feminism flooded the Facebook newsfeeds of Beverly students last week after the speech went viral. On Sept. 25, Watson traveled to the U.N. Headquarters to launch her new campaigns for gender equality, “#HeForShe” and “#YesAllWomen”. The actress’s bold speech concerning feminism and gender equality, which launched the #HeForShe campaign, called for an end to the inequalities that women face worldwide. Among many definitive statements, Watson attempted to rectify what she believes is a severely misunderstood definition

of feminism by citing the Merriam-Webster perspective on the matter. “For the record, feminism by definition is the belief that men and women should have equal rights and opportunities,” Watson said. “It is the theory of the political, economic and social equality of the sexes.” Students at Beverly echo both Watson and Webster’s definition of feminism. Senior Luca Amato defines feminism as “the movement for making rights equal for all genders.” Senior Megan Moreh, who watched Watson’s video and read many of the negative comments it received on YouTube, defined feminism as “equality of opportunities of genders in all aspects.” In her speech, Watson cited political, economic and social standing as aspects of life she believes gender equality should

permeate. “I am from Britain and think it is right that as a woman I am paid the same as my male counterparts,” Watson said. “I think it is right that I should be able to make decisions about my own body. I think it is right that women be involved on my behalf in the policies and decision-making of my country. I think it is right that socially I am afforded the same respect as men. But sadly I can say that there is no one country in the world where all women can expect to receive these rights.” As the speech began to trend on social networking sites, Beverly students contributed to the feminist deluge by “liking”, sharing and posting the video of Watson’s speech via Facebook. Senior Olivia Koshy, who watched the video, commended Emma Watson for bringing awareness. Continued on page 4

CO students, teachers fight ASB hosts, plans censorship of US history first talent show Veronica Pahovoma staff writer According to a report on Democracy Now, in attempt to initiate greater conformity among the student body, a county school board in Colorado announced their plan to eliminating any information of historical acts of civil disobedience from the district’s high school U.S. history curriculum. Ironically, this proposition only generated the very thing the board tried to diminish. The spark intensified from a minor dispute into a flame of protests when the board publicized their intentions of reviewing Advanced Placement (AP) courses and adding more material to it that would “promote citizenship, patriotism, essentials and benefits of the free-market system, respect for authority and respect for individual rights.” As stated by Amy Goodman of Democracy Now, “The proposed changes also call for the removal of course materials that ‘encourage or condone civil disorder, social strife or disregard of the law’.” In response, teachers refused to show up to work, pulling the

illness card. This lead to mass organized “sick-outs” with the absence of 72 of 102 teachers at Golden High School and Jefferson High School in Jefferson County, causing classes to be canceled for the second time. Some, however, choose to side with county school board. Fox

also encourage that there be no disregard for the law. Isn’t that why we have laws on the books?” Defending her and the board’s plan on MSNBC, Jefferson County school board member Julie Williams said, “I’m not saying let’s not teach history accurately; what I’m saying is let’s not en-

Cartoon by: VERONICA PAHOMOVA News host Gretchen Carlson, for example, stated her opinion on the matter. “And what does it say about our young people in this country and the teachers joining the protests that promoting patriotism is now a negative?” Carlson said. “The new curriculum would also teach a free-market system, like the one we already have. It would

courage our children to disobey the law.” According to John Ford, president of the Jefferson County Education Association and a social studies teacher at Moore Middle School, the school board majority that was elected is a “conservative group.” To read the full article, visit www.beverlyhighlights.com

Lucas Harward staff writer ASB is planning and producing Beverly’s first annual talent show. The show will take place on Oct. 16 from 4 to 7 p.m., and will feature about 25 acts. Senior Class President Danny Newman had the original idea for a talent show, which stemmed from his everyday experiences as a Beverly student“There’s just a lot of people at this school with a lot of talent,” Newman said. “I walk through the halls and I see all these people who are dancers, who are singers, who are magicians, and yet these people haven’t had a way to showcase their talent, so I decided that a perfect way to do this would be to host a talent show so we can show off what amazing students we have here.” One of the show’s participants will be senior Elliott Eghbali, whose act will revolve around entertainment and comedy. “I feel like [comedy] is one of the best things I do for fun. A lot of people tell me that I should be a comedian or do some type of YouTube channel, so I wanted to take advantage of this talent show to show people what I’m good at,” Eghbali said. Newman has high hopes for how the show will turn out, despite the fact that a talent show is a relatively new concept at Beverly. “I’m hoping that it will be a

great show. We haven’t had a talent show in a while, so there’s nothing to judge off of, but we’re working on getting judges and prizes, so hopefully everything will turn out great,” Newman said. ASB President Alanna Schenk is also eager to see not only how the show turns out, but also how it influences the students who watch it. “I’m very excited about it and I think that there will be a great turnout of students wanting to watch the show. I know the students will have a lot of fun seeing their friends perform, and it might inspire them to go out and try something new and find their own special talent,” Schenk said. And in a school that is all about having students find a passion, ASB director Mark Mead sees the talent show as a vehicle to accomplish this goal.“I hope that the student body will realize that ASB is trying to provide a platform for people to get involved,” Mead said. “I know that the talent is out there, so I’m hopeful that ASB and the students will see that we encourage it, and it’s a safe place to show off what you can do.” But as Newman points out, the exciting prospect of a talent show had challenges. “It was extremely difficult to decide who made the show,” Newman said. To read the full article, visit www.beverlyhighlights.com 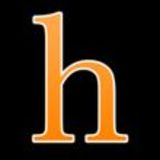