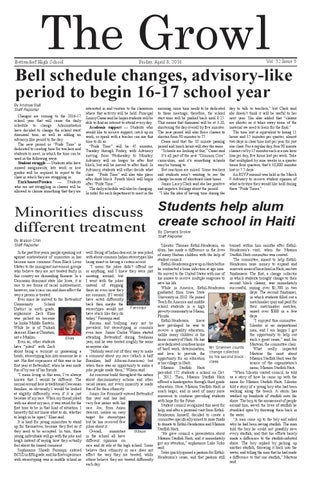 By Andrew Ball Staff Reporter Changes are coming to the 2016-17 school year that will cause the daily schedule to change. Administrators have decided to change the school start/ dismissal time, as well as adding an advisory-like period to the day. The new period or “Pride Time” is dedicated to creating time for teachers and students to meet, in which the time can be used in the following ways: Student struggle — Students who have missed assignments, late work or low grades will be required to report to the class in which they are struggling in. Enrichment/Passion — Students who are not struggling in classes will be allowed to choose something that they are

interested in and venture to the classroom where that activity will be held. Principal Jimmy Casas said he hopes students will be able to find an interest to attend every day. Academic support — Students who would like to receive support, catch up on work, or speak with a teacher can use this time to do so. “Pride Time” will be 45 minutes, Tuesday through Friday, with Advisory moving from Wednesday to Monday. Advisory will no longer be after first block, but will be moved to after third. In Advisory, students will either decide what class “Pride Time” will also take place after third block. Fourth block will begin after “Pride Time.” The daily schedule will also be changing. In order for each department to meet in the

morning, more time needs to be dedicated to these meetings; therefore, the school start time will be pushed back until 8:25. This means that dismissal will be at 3:20, shortening the day overall by five minutes. The new period will also force classes to shorten from 90 minutes to 75. Casas said that the 10 minute passing period and lunch hours will stay the same. “Schools are looking at this,” Casas said It’s all part of the new “Common Core” curriculum, and it’s something schools may be turning to. But reactions are mixed. Some teachers and students aren’t wanting to see the change because of shortened class times. Junior Lacey Clark said she has positive and negative feelings about the period. “I like the idea of having time during the

day to talk to teachers,” but Clark said she doesn’t think it will be useful to her next year. She also added that “classes are shorter so it takes away some of the material we need to learn for the final.” The time lost is equivalent to losing 11 hours and 15 minutes per quarter, almost two days in class time lost per year for just one class. For a regular day, four 90 minute classes cut by 15 minutes each is a one hour loss per day, five hours lost per week. Take that multiplied by nine weeks in a quarter times four quarters, that’s 10,800 minutes lost or 7.5 days. An RSVP summit was held in the March 9 Advisory to receive student opinion of what activities they would like held during these “Pride Times.”

By Mason Chin Staff Reporter In the past few years, people speaking out against mistreatment of minorities in has become more common. From Black Lives Matter to the immigrant movement, groups who believe they are not treated fairly in this country are demanding fairness. In a Caucasian dominant state like Iowa, it is rare to see forms of racial mistreatment; however, one’s race can and does affect the way a person is treated. Ever since he moved to the Bettendorf Community School District in sixth grade, sophomore Zach Elias was picked on because he looks Middle Eastern. While he is of Turkish descent, Elias is Christian, not a Muslim. Elias Even so, other students have “joked” with Zach about being a terrorist or possessing a bomb, stereotyping him into someone he is not. His first experience of this was in his first year at Bettendorf, when he was made fun of by one of his friends. “I mean living in this area, I’ve always known that I would be different. The normal around here is traditional Caucasian families, so obviously I would be looked at slightly differently, even if it is just because of my race. When my friend joked with me about my race, it was weird for the first time to be in that kind of situation. I honestly did not know what to do, whether to laugh or be upset,” Elias said. It is hard for young minorities to stand up for themselves, because they feel as if they need to be accepted. In turn, these young individuals will go with the joke and laugh instead of saying how they actually feel about the biased comment. Sophomore Shoaib Farooqui entered BCSD in fifth grade, and his first experience with stereotyping was in middle school as

well. Being of Indian descent, he was joked with about common Indian stereotypes like being smart or having a certain accent. “I mean the jokes didn’t offend me or anything, and I knew they were just messing around, but I went with the jokes instead of stopping them so even now they are common. If I would have acted differently back then maybe the Farooqui stereotypes would not

have stuck like they do today,” Farooqui said. Racism and bullying may not be prevalent, but stereotyping is common even here. Junior Carlos Wilson started attending Bettendorf during freshman year, and he was treated roughly the same as anyone else. “Nobody went out of their way to make a comment about my race (which is half Brazilian, half African-American) but when there was an opportunity to make a joke people made them,” Wilson said. As concerns build throughout the nation about discriminatory actions and other racial issues, not every minority is made fun of for their ethnicity. Junior Joe Frommelt entered Bettendorf this year and has had very few issues with his race. Joe, from Asian descent, makes an easy target for stereotypes but he has received few jokes about it. Overall, minorities Wilson in the school all have different opinions on race and its role at the high school. Some believe their ethnicity or race does not affect the way they are treated, while others believe they are treated differently each day.

Silentor Thomas Esthil-Henderson, an burned within him months after Esthilalum, has made a difference in the lives Henderson’s visit, when the Mission of many Haitian children with the help of Starfish Haiti committee was created. student council. The committee, aimed to help EsthilEsthil-Henderson grew up in Haiti before Henderson raise money to expand and he contracted a bone infection at age nine. renovate areas of his school in Haiti, ran two He moved to the United States with one of fundraisers. The first, a change collector his nurses to receive multiple surgeries to in which students brought change to their save his life. second block classes, was immediately While in America, Esthil-Henderson successful, raising over $1,700 in two graduated from Iowa State days. The second fundraiser, University in 2010. He joined in which students filled out a Teach for America and middle matchmaker quiz and paid for school students in a high their matchmaker matches, poverty community in Miami, raised over $300 in a few Florida. days. Esthil-Henderson knew “I enjoyed this committee. how privileged he was to Silentor is an inspirational receive a quality education, man, and I am happy I got unlike many children in his the opportunity to help out home country of Haiti. He has such a great cause,” said Joe now dedicated countless hours Martens, the committee chair. of hard work, determination, Mr. Grannen counts What really impacted and love to provide the change collected Martens the most about opportunity for an education by his second block Mission Starfish Haiti was the class. is his village in Haiti. source of the organization’s Mission Starfish Haiti name, Mission Starfish Haiti. provided 172 students a school on Oct. “When Silentor visited council, he told 1, 2012. Then, Mission Starfish Haiti us a story of how he came up with the offered a kindergarten through third grade name for Mission Starfish Haiti. Silentor education. Now, Mission Starfish Haiti is told a story of a young boy who had been much larger, and in need of many more walking along the beach. A storm has resources to continue providing students washed up hundreds of starfish onto the with hope for the future. shore. The boy, to the amusement of people Student council recognized this need for around him, saved the lives of starfish he help, and after a personal visit from Esthil- stumbled upon by throwing them back in Henderson himself, decided to create a the water. committee specifically aimed to raise funds “A man came up to the boy and asked to donate to Esthil-Henderson and Mission why he had been saving starfish. The man Starfish Haiti. told the boy he could not possibly save “He gave council a presentation about every starfish, and that his efforts barely Mission Starfish Haiti, and it immediately made a difference to the starfish-infested got my attention,” sophomore Luke Soko shore. The boy replied by picking up said. another starfish, throwing it back into the Soko quickly gained a passion for Esthil- water, and telling the man that he had made Henderson’s cause, and that passion still a difference to that one starfish,” Martens said. 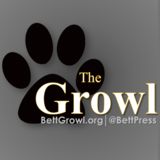