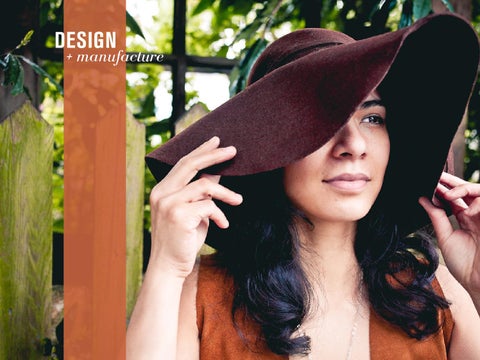 ABOUT THIS PUBLICATION Saüse started as a vision of elegant work produced by talented designers, who, aside from being wholly devoted to their craft, were devoted to one another as friends. Naturally, as the group was newly formed and initially unsure of its own bandwidth, many ideas for potential projects were thrown into the mix. They ranged from local flavor T-shirt designs to ornate and bizarre photoshoots to bachelorette event packages. However, as their first foyer into working together, the group had to carefully weigh each suggestion to eventually arrive at an idea which would allow all talents to come to bear in producing something tasteful, creative, and perhaps even uniquely Portland. Mag-Big was selected as the most mutually agreeable potential client. The store’s magnetic

sense of local loyalty and promotion of all things Portland made it and the apparel designers who proudly offer their goods within it a good fit with the sentiments and motivations of the Saüse design crew. In addition, since half the Saüse crew had helped the owner construct the shop from the ground up several years prior, it seemed a logical progression to turn their talents to what they did best: design. The magazine which you have before you represents many hours of planning, photographing, retouching, emailing, compiling, editing, and all manner of other designerly activities. However, perhaps more so, this publication represents what happens when a small but passionate group of people come together to do something they believe will accurately reflect not only their skill sets, but their fundamental insights into why it is right to support your local economy, exciting to be a designer, and amazing to be a Portlander. 3

Portland has an effect on the creative spirit. It shakes the inner Maker, urging it to manifest, yielding the stuff of dreams, bar napkin sketches and wellintentioned dares. Cassie Ridgway of Mag-Big is one such Maker. Trained in poetics and critical theory, her pursuit of scholarship applied now to advocating small production manufacturing and supporting area designers. Mag-Big is more than a retail location with local wares. Mag-Big is a fulcrum for the independent design and manufacturing scene of Portland.

“I wanted a career, but I wanted it to be stylish,” says Cassie. And it has been that and more: intensely rewarding and good for the planet, making clothing sustainably and helping others sell their conscientious products has synthesized the passions of the like minded for the greater good. Embracing the calling of a Maker is no linear endeavor. Stoking the coals and feeding the fire that keeps your craft alive is as demanding as the craft itself. Cassie is also a musician. “I wish I had more time for my band. If I had all the time in the world, I would rehearse with the guys more, and open myself up to photography: Beth Olson Creative story: Carmella Vargas || models: Nora Grod &amp; Casey Hoelting

drape. The changes, deftly executed in under a minuet and a half, included more than a few were corsets. Alley 33 is an annual spring fashion show, held in the alley that is nominally SE 33rd at Hawthorne. Featured will be 25 Portland-based designer-manufacturers with both a local presence and national distribution and highlight ready-to-wear garments for everyday. Whether you are looking to update the wardrobe with local love or you’re a sartorial fiend in need of a fix, save the date: August 28th, 2013. the possibility of touring.” Not one to do things halfheartedly, she contents herself with a small show now and again, utilizing the sewing studio above Mag-Big as a late-night rehearsal space. Keep an ear out for Love Tackle, Cassie’s folk band. “Make it work” is a phrase bandied about these days and Cassie’s efforts tend to transcend this edict. Unmentionable: A Lingerie Exposition this last February winter went off without a hitch. This, despite working with a dressing “room” for 17 models plus their 8 dressers which was but a 10’ x 10’ box of PVC pipe and 6

I stand by Portland’s small production Makers with all my heart and soul. I learn from them. I relish the discourse we create and the friendships we foster.

Cassie Ridgway in the Mag-Big studio | photos by Dan Cole

Labyrinthine Labor of Love Art is both product and process. Learning new techniques inform a style, style changes and iterations become a body of work. The means inform that which is made, and who the Maker becomes. Amira Mednic of AMiRA Jewelry was schooled in fine art New York and was intent on leading the life of gallery shows and studio hermitage until a tour of Latin America changed everything. As a volunteer in South America she learned how to macramĂŠ from a local artist. The artist who was selling her wares on the sidewalk in a plaza where artists gathered every weekend taught her some basic knotting skills. The experience brought back the memories of childhood summers spent knotting friendship bracelets. photography: Beth Olson Creative story: Carmella Vargas model: Emily Olson

“Often my instinct is to travel, to make a journey somewhere else, somewhere new. And, this journey and this somewhere new is not always a physical place, but can be an idea, as well.” While living in Argentina, Amira applied her new found skills with locally available string, seeds and beads. Once returning to the States, she began incorporating the jewelry making skills gained while working at a bead shop during high school, and started sharing that with family and friends through in-home jewelry parties. “By adding colorful macramé to my jewelry process, I was incorporating my painting interests into my jewelry making - fusing the two. And, I felt I had something unique to share - the story and the art.”

Portland is known for its sense of community, especially among Artists. The strength of that community stems from being from and wanting to reach beyond its geographical boundaries. Amira became aware of NAKATE, a Brooklyn-based company that uses the

creation of their pieces as an opportunity to establish relationships connecting Ugandan professionals and artisans with marginalized women in rural villages – using African talent to nourish African growth and development. To fulfill her desire to bring the AMiRA collection to a more socially responsible level, she began supporting NAKATE by sourcing materials from them. What resulted inspired NAKATE’s founder Shanley Knox, to ask Amira to design a new line incorporating the Ugandan paper beads with macramé and metalwork, bringing together AMiRA Jewelry in Portland with NAKATE in Brooklyn, a collaboration between cultures, countries and coasts to support women everywhere.

AMiRA Jewelry brings exotic elements of fiber, texture and color to not simply reproduce a style of cultural motif, but synthesize them. Her travels, adventures and taste for the rare spices and textures that are a departure from the everyday are reflected in each piece.

…and spicy Some of the best things about Oregon come in bottles. Aside from the obvious microbrews there’s Marshall’s Haute Sauce. When the Marshalls bought their first house, Sarah was most excited about having a garden. Growing food, canning it, making things from scratch, hyperlocal style. She started making her own condiments and hot sauces. Not one to keep a good thing to themselves, those privileged enough to get a taste started asking for whole jars.

It was obviously time to look into having her product in the marketplace. Marshallâ&amp;#x20AC;&amp;#x2122;s Haute Sauce started in November of 2011 and quickly outgrew their production capacity. They afforded a commercial kitchen space thanks to a successful Kickstarter campaign and have begun to offer other small batch producers. Highlighting local NW ingredients Marshallâ&amp;#x20AC;&amp;#x2122;s Haute Sauce uses artesian products like honey, Bee Local, Jacobsen Salt- harvested from the Oregon coast. Their spices come from a locally owned shop, Stone Cottage.

â&amp;#x20AC;&amp;#x153;There is something magical about my husband and I being the only people to pick out and process every ingredient in our sauces.â&amp;#x20AC;? We felt these ingredients

were unique to Oregon and wanted to put that into a bottle. Our core sauce flavors include Serrano Ginger Lemongrass, Smoked Habanero Barbeque, Red Chili Lime, and Habanero Carrot Curry. This two-maker operation strives to support other small businesses and get as many ingredients as locally as they can. In the summer their produce comes from local farmers theyâ&amp;#x20AC;&amp;#x2122;ve met through working at farmers markets together. In the winter they buy from local stores who can provide high quality of produce from farms outside of Oregon. 19

You can find Marshallâ&amp;#x20AC;&amp;#x2122;s Haute Sauce starting this June at the Pioneer Square Farmers Market on Mondays, the NW Portland Market on Thursdays, in Lake Oswego and PSU Markets on Saturdays, and in Milwaukie on Sundays. If you find yourself without a decent condiment in Seattle, Urban Craft Uprising will start carrying Haute Sauce for the first time this summer. And of course, you can always find it at Mag-Big, right here in PDX.

Affectionate Fashion and the New Timeless Carolyn Hart, is a local womenâ&amp;#x20AC;&amp;#x2122;s clothing line created with love and the enduring passion of a woman who wants to share the virtues of a live well lived. Garments with classic lines with a flare of edginess, making for womenâ&amp;#x20AC;&amp;#x2122;s wear that is as fun as it is timeless. First Fridays, seasonal shows and collaboration with other designers and local jewelers keep this Maker busy and in the loop. A true Maker, she creates her own challenges. Carolyn challenged herself to a year-long project to create one unique piece of clothing every

Designing every day is like a dream for me, reflected in each and every garment I create.

month.” This is a challenge I’m placing upon myself so that I never settle and take the easy, plain old road!” That challenge has produced incites invaluable to an independent maker. While draping one of the first dresses for this project, the course of the design began to change, and she strayed from the sketch. “But that is my favorite part of designing. Yes, I will color outside of the lines if I really want to!” While being bent on innovation, Carolyn knows the value of nostalgia. She started 2012 by reviving an old design. It was a favorite but the photo didn’t quite do it justice. It took 12 yards of fabric in total to create it, 100% silk and “feels like it has a life of its own”. Carolyn’s creative passion and love of life are stitched into every garment with an appreciation for the past and excitement for what comes next. 25

Mag-Big carries the makers in this publication and hundreds more, all from Portland, Oregon! www.Magbig.com

A lookbook inspired publication that focuses on the stories of people who are designing, creating and producing locally in Portland, Or. 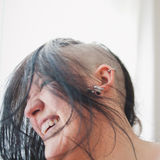