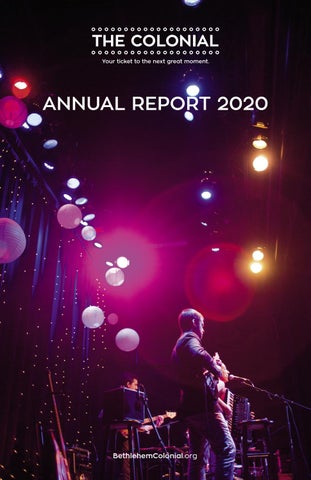 From Our Board President Dear Colonial Friends, There is no denying that 2020 was a year for the record books. Following on the heels of The Colonial’s incredibly successful 2019 season, we found ourselves faced with a worldwide pandemic which we confronted head-on. Having delayed our season opening, we opened the doors in July with limited seating and curtailed programming. Offering movies in-theater and via streaming, with a special live virtual performance by Ben Cosgrove in September, we sought to maintain contact with our members and audience, and to be a positive presence in the community. As the challenges of Covid-19 persist, we are dedicating ourselves to developing programming for the 2020 season that will allow us to continue our mission of providing arts and culture to the North Country. While navigating the pandemic, The Colonial experienced a change in leadership. In January, after two decades of dedicated service to The Colonial, Stephen Dignazio stepped down as Executive Director. During his tenure Stephen accomplished much, earning the appreciation and gratitude of The Colonial’s Board of Directors, members, donors, volunteers, and the community at large. Successful in numerous fundraising efforts, Stephen lovingly restored the historically significant, but neglected theatre, creating a premiere performance venue, and bringing innovative artistic and cultural programming to the North Country. Despite his readiness to embark on his life’s next chapter, Stephen remains committed to the theatre. Currently he is focusing his energy on programming for the new season, providing institutional continuity and ensuring a smooth leadership transition. Concurrent with Stephen taking a step back, The Colonial was thrilled to appoint Christine Kelly, who had served as Assistant Director of Advancement and Marketing since 2019, to the position of Executive Director. Christine brings not only years of development and marketing experience to bear, but boundless enthusiasm and creativity. In her short time at the helm, Christine has already made significant contributions and continues to exceed all expectations. As The Colonial, along with the rest of the world, responds to the challenges of a pandemic and adjusts to a new reality, we look forward to a brighter future. The theatre is financially sound and we are excited about the opportunities that lie ahead. We will be sure to keep you posted as plans for the 2021 season fall into place. In the meantime, please join me in thanking Stephen Dignazio for his vision, perseverance, dedication, and many years of service to The Colonial Theatre and to the community. He is truly a North Country treasure. Likewise, please join me in congratulating Christine on her promotion. The Colonial is incredibly lucky to have her leading the theatre into the next decade. And lastly, I want to thank all of you for your loyalty and unflagging support. You are the reason we do what we do. I look forward to seeing you at the theatre! All best wishes,

An enlightened and enriched community through arts and culture.

The Colonial Theatre is the home of arts, film, music and culture in New Hampshire’s North Country. The 300-seat theater offers state-of-the-art digital projection and surround sound for independent and world cinema, and hosts Grammy award-winning performing artists and family entertainment from May through October—all without losing the intimate charm of a vintage summer theater.

Our Mission Through relevant arts and cultural programming, we nurture the heritage and prosperity of the communities we serve.

When The Colonial opened its doors in 1915, the era of the Grand Hotels was in full swing and Bethlehem, New Hampshire was a premier destination resort. Because of its sophisticated clientele it quickly became a venue for studios to test market their films. The Colonial is the oldest continuously operating movie theatre in the United States. With its rich history The Colonial is one of the few remaining links to the era of the Grand Hotels as well as a significant chapter in the history of the film industry. The Colonial Theatre is on New Hampshire Registry of Historic Places and was named “Best Vintage Movie Theatre” by Yankee Magazine. The Colonial Theatre 2020 Annual Report  |  3

A Note From The Executive Director Dear Friends, The Colonial Theatre was built on the desire to improve the quality of life in the North Country by presenting formerly unavailable arts programming. Through 20 years of hard work, persistence, problem solving, and most importantly your support, our community has transformed a dilapidated building into a premier cultural venue. This pandemic poses a myriad of challenges to our institution—show cancellations, halted movie releases, and, most critically, the inability to convene community in our historic Theatre. When The Colonial was unable to open its doors last season we pivoted, offering virtual screenings, webinars, and livestream concerts. When reopening was deemed safe, we streamlined operations, established an abbreviated film schedule, implemented new safety protocols, and reduced our auditorium capacity by 75%. The 2020 season was unusual, but also successful in continuing The Colonial’s mission. Despite the challenges that still lay before us, we look to the future with optimism and purpose. Traditionally this time of year The Colonial would be gearing up for another recordbreaking season of arts presentation. Though our 2021 season may be untraditional, we look forward to coming back stronger than ever. We will continue to find creative ways to offer programming and nurture the heritage, prosperity, and aspirations of the communities we serve. We are tremendously proud of the creativity, care, and thoughtfulness of our volunteers, members, Board of Directors, staff, and community throughout this tender time. Because of your commitment to our mission, the spirit and future of The Colonial are bright. We are deeply grateful for your support of The Colonial. We hope to see you soon. Sincerely,

★★★★★ “ Great movie choices… feels like being a member of a book club with all the eclectic and poignant movies. After watching, you can discuss all night with your date.” —FACEBOOK REVIEW 4  |  The Colonial Theatre 2020 Annual Report

Remembering Ann Gruczka We would like to take this opportunity to note the passing of Ann Gruczka on July 23, 2020. Ann was The Colonial’s longtime volunteer coordinator and a funny, courageous, profane, always optimistic founding Colonial board member and champion of the Theatre. I could always count on Ann to assure me that the show would be sold out, the movie wasn’t that depressing, and the check was in the mail. She was a dear friend, a good neighbor and one hell of a knitter. She is missed. —Stephen Dignazio

The Year in Pictures In addition to offering virtual screenings, webinars, and opening for an abbreviated 2020 season in the Theatre, The Colonial implemented infrastructure improvements including a new 23 foot movie screen, digital mixing board, speakers, and a fresh coat of paint in our concession area. We also had the opportunity to host a livestream concert from The Colonial’s stage with singer-songwriter Ben Cosgrove.

Fiscal Year Ending September 30, 2020 A heart-felt thank you to all of our members and supporters. Because of you, The Colonial will emerge from this challenging year stronger, more resilient, and better than ever. * Asterisks indicate our Sustaining Donors, who graciously set up automatic monthly contributions to The Colonial Theatre.

Link Your Legacy to The Colonial Theatre Our values, our interests, and our dreams are reflected in what we care about most — our families, our communities, and the organizations we love, such as The Colonial Theatre. The Colonial’s Legacy Society, our planned giving program, was established with its first bequest 11 years ago. That unexpected and generous gift created a foundation to assure The Colonial’s long-term financial stability. Now named the Huntington Legacy Society (in recognition of its initial donor),

we encourage members, donors, and other supporters to include The Colonial Theatre in their estate planning. Your foresight and lasting support will allow The Colonial Theatre to continue serving our community for generations to come. For more information on how to make a planned gift that benefits you, your loved ones, and The Colonial Theatre please call Christine Kelly, Executive Director, at 603-869-5603 or email ckelly@bethlehemcolonial.org.

★★★★★ “ This theatre is a gem set in a growing small town. It is a great venue to see a concert. It allows a very intimate interaction between the performers and the audience. The staff are wonderful people, they really care about your experience and work hard to ensure you have an amazing time. Thank you for providing so much culture to Bethlehem.” —GOOGLE REVIEW

Member Spotlight Anastasia Maher How long have you been a member? I have been a member since 2019! Why did you become a member? I became a member so I could help bring “the next great thing” to the North Country! Now more than ever it’s important to put your money behind what you believe in, and I firmly believe in the cultural, community, and creative center The Colonial has made itself. It’s time for young people like myself to start investing in the types of institutions we want to keep in our communities. In return for your support, I feel like the Colonial gives you generous perks that make it even easier to enjoy their movies, shows, and events. Do you have a favorite event(s) and why? That was such a difficult question to answer until “Booksmart”. When it came to The Colonial I saw it at least 4 times there, and have seen it at least 10 times since! Do you have a favorite Colonial event(s) and why? It’s so hard to choose! One of my favorites is seeing the Hot Sardines during summer 2019. Watching lead singer Elizabeth Bougerol live her best life on stage in those sparkly black boots and end the set with an epic tambourine drop is something I still think about today. My other favorite was my last Colonial concert — Red Baraat. They had everyone on their feet in the first two minutes and got everyone to forget their worries, if only for two hours. What do you like best about The Colonial? I’ve always heard people talk about “your friendly neighborhood coffee shop”, or “your friendly neighborhood pizza place”, but never “your friendly neighborhood movie theater”. But that’s what The Colonial is! The staff, the volunteers, and the patrons are always so nice, and you can tell that everyone is happy to be there. And the local beer selection doesn’t hurt either :) Anything else you’d like us to know? It has been so awe-inspiring to watch The Colonial adapt to these unprecedented times, while still being able to keep everyone safe and fulfill their mission. I look forward to the days we can all dance in the aisles again, but until then I am content to stay safe, stay happy, and stay tuned. Thank you Anastasia!

❑  I would like to become a sustaining donor at $_______ per month*. * Any monthly gift of $10 or more includes a FREE individual or household membership.

ADDITIONAL GIFTS TO THE COLONIAL

❑  I would like to support continued restoration, improvements, and cultural programs with a tax deductible gift* of:

The Colonial Theatre is the home of arts, film, music and culture in Bethlehem, New Hampshire.