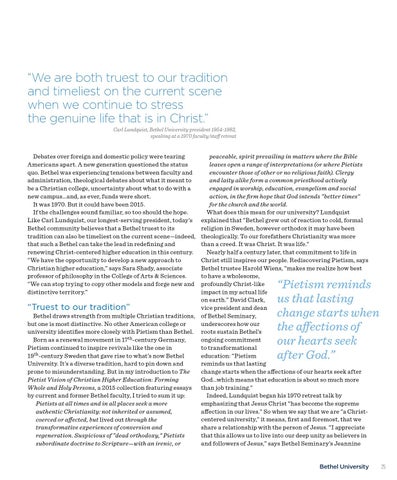 “We are both truest to our tradition and timeliest on the current scene when we continue to stress the genuine life that is in Christ.” Carl Lundquist, Bethel University president 1954-1982, speaking at a 1970 faculty/staff retreat

peaceable, spirit prevailing in matters where the Bible leaves open a range of interpretations (or where Pietists encounter those of other or no religious faith). Clergy and laity alike form a common priesthood actively engaged in worship, education, evangelism and social action, in the firm hope that God intends “better times” for the church and the world. What does this mean for our university? Lundquist explained that “Bethel grew out of reaction to cold, formal religion in Sweden, however orthodox it may have been theologically. To our forefathers Christianity was more than a creed. It was Christ. It was life.” Nearly half a century later, that commitment to life in Christ still inspires our people. Rediscovering Pietism, says Bethel trustee Harold Wiens, “makes me realize how best to have a wholesome, profoundly Christ-like impact in my actual life on earth.” David Clark, vice president and dean “Truest to our tradition” Bethel draws strength from multiple Christian traditions, of Bethel Seminary, underscores how our but one is most distinctive. No other American college or university identifies more closely with Pietism than Bethel. roots sustain Bethel’s ongoing commitment Born as a renewal movement in 17th-century Germany, to transformational Pietism continued to inspire revivals like the one in education: “Pietism 19th-century Sweden that gave rise to what’s now Bethel reminds us that lasting University. It’s a diverse tradition, hard to pin down and change starts when the affections of our hearts seek after prone to misunderstanding. But in my introduction to The God…which means that education is about so much more Pietist Vision of Christian Higher Education: Forming Whole and Holy Persons, a 2015 collection featuring essays than job training.” Indeed, Lundquist began his 1970 retreat talk by by current and former Bethel faculty, I tried to sum it up: emphasizing that Jesus Christ “has become the supreme Pietists at all times and in all places seek a more affection in our lives.” So when we say that we are “a Christauthentic Christianity: not inherited or assumed, centered university,” it means, first and foremost, that we coerced or affected, but lived out through the share a relationship with the person of Jesus. “I appreciate transformative experiences of conversion and that this allows us to live into our deep unity as believers in regeneration. Suspicious of “dead orthodoxy,” Pietists and followers of Jesus,” says Bethel Seminary’s Jeannine subordinate doctrine to Scripture—with an irenic, or Debates over foreign and domestic policy were tearing Americans apart. A new generation questioned the status quo. Bethel was experiencing tensions between faculty and administration, theological debates about what it meant to be a Christian college, uncertainty about what to do with a new campus…and, as ever, funds were short. It was 1970. But it could have been 2015. If the challenges sound familiar, so too should the hope. Like Carl Lundquist, our longest-serving president, today’s Bethel community believes that a Bethel truest to its tradition can also be timeliest on the current scene—indeed, that such a Bethel can take the lead in redefining and renewing Christ-centered higher education in this century. “We have the opportunity to develop a new approach to Christian higher education,” says Sara Shady, associate professor of philosophy in the College of Arts &amp; Sciences. “We can stop trying to copy other models and forge new and distinctive territory.”

“Pietism reminds us that lasting change starts when the affections of our hearts seek after God.”

Read about national concerns of rising college tuition, experience Yemen through the eyes of photojournalist and alum Alex Potter, learn about Bethel's bold new vision statement and much more! 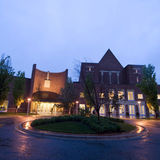