from Around the Green - Winter 2019
by Bethel College 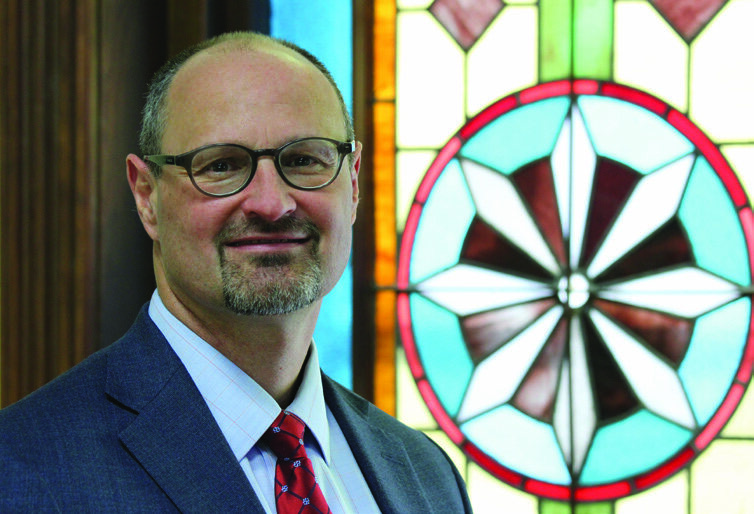 THE COST OF HURRYING
by MELANIE ZUERCHER

After going out to see the world, two alumni came back to the farm, and hope cheese will give them a sustainable way to thrive.

Neither has an undergraduate degree in agriculture. One freely admits he spent most of his 20s “running from the farm.” Yet here they are. Both Jason Schmidt ’04 and Miriam Goertzen-Regier ’08 are making a living farming, on land east of Newton, Kan., that has been in their respective families for generations. The two recently began working together to make cheese from some of the milk Jason produces on his dairy farm, Grazing Plains LLC.

Before Bethel, Jason graduated from Hesston (Kan.) College, the two-year Mennonite school down the road, then went to South Africa with the Serve and Learn Together (SALT) program of Mennonite Central Committee.

“I shadowed a retired Anglican priest who was starting small business enterprises, mostly organic vegetable co-ops that helped disempowered youth grow food sustainably. That experience began to open my eyes to the connection between the land, environmental preservation, and social justice and poverty issues.”

After that year, he came to Bethel, where he was one of the last global peace and justice majors, with a focus on international development. Then he went to Colorado for two years with Mennonite Voluntary Service (MVS), working in Alamosa and La Jara with community gardens and organic vegetable co-ops.

That’s when the farming bug started getting to me. I went into MVS thinking it was going to be training to go back overseas, but I began feeling the pull to go back home.

Jason met his wife, Carol Longenecker, in MVS. When she got into graduate school at Clemson University in South Carolina, he says, “I found a master’s program in plant and environmental science that was right down my alley, studying grazing systems. In those two-and-a-half years in grad school, I decided I really wanted to farm. Carol was game to give it a try.

“At Clemson, I decided on the kind of farming I wanted to do. Coming from a dairy farm, there was a lot of potential for moving it toward pasture-based, with the dream of eventually marketing my own dairy products.”

Miriam majored in mathematics and German at Bethel and then followed a path not so different from Jason’s.

“I did MVS in Evansville, Ind. My job title was urban gardener, which was delightful. I managed an emergency food pantry in the mornings, and in the afternoons, I made healthy snacks for kids and taught them how to garden. [Like Jason,] I began to see the link at a local level between farming, between connecting people with food, and social justice.

“I remember seeing kids come back for seconds and thirds on kale because they grew it themselves. I realized: There’s something at work here that isn’t happening in the broader society.” In Evansville, Miriam says she began to see “Kansas was home and where I wanted to eventually end up.” After two years in Evansville, she did another MVS term in Tucson, Ariz., with a low-income home repair organization, and then a SALT term in Bosnia, where she worked on a small-scale farm that functioned as a therapeutic community for men in recovery from addiction.

Miriam is a 5th-generation farmer on the Regier side. Her father, Dwight Regier ’80, raises field crops (corn, soybeans, milo, wheat) and specializes in humanely raised, antibiotic-free hogs. When Miriam returned from Bosnia, her parents offered her one of their fields to do her own farming. She also works for her father as a farmhand. (Her husband, Ryan Goertzen-Regier ’12, works full-time in tech support for Mennonite Church USA in Newton. He was raised on a Kansas farm as well, and now does beekeeping and honey production on the side.)

Jason represents the 4th generation of Schmidts on the home place but the 5th farming in the rural Newton/Whitewater area. His greatgreatgrandparents homesteaded two miles north of the home farm in the 1870s. His grandparents started the dairy farm in the 1940s and ’50s. Jason bought the operation from his parents, Jeanne (Penner) ’75 and Ralph Schmidt ’72.

When Miriam was first back in Newton, she worked as a baker at Prairie Harvest (now Prairy Market), but came to “the slow realization that being on the farm, and that kind of work, was how I wanted to spend most of my time. Getting to see different methods of agriculture has been helpful for providing some direction and also making it a little harder to see with rose-colored glasses.

“My farming is a fairly small portion of my income [currently]. I’m looking at moving away from tillage, into rotation that includes cover crops and pasture animals. It all comes back to soil [and caring for the soil].”

“That little crust on the earth is what has given us all life. If you’re sustainably minded, you eventually realize it’s all about building, protecting, loving and bringing it back to life.

“The convergence of the no-till and sustainability movements has made it much more accepted to see soil as a living organism that needs to be protected, although how you do that varies.” Jason milks around 75 cows, selling most of the milk to a large national co-op, Dairy Farmers of America. His dream is to eventually reduce his herd by about half and “get out of the commodity milk market” – and that’s where he and Miriam have gotten together.

“We have been talking about what it would mean to make cheese since Miriam lived with [my sister] Jill [Schmidt ’05] for a year, in 2011- 12. Miriam likes food science, so we were talking about a ‘Newton Area Cheese Head Organization,’ or NACHO.

“We made mozzarella one time,” Miriam says, “and Jason couldn’t keep his fingers out of the pot, he was so impatient. I decided I was going to be the cheese maker and Jason was going to be the farmer.” “The dairy industry has been in a terrible cycle for the last five years, at or below the cost of production,” Jason says. “Typically, it’s a 3-year cycle, where you hit a low, it recovers, you come back up, you go back down. But we’ve now had five years of right below cost. It’s been rough. At least Carol can put food on the table with her job as a lawyer in the Kansas Appellate Office.

“A little over a year ago, Miriam and I decided to get serious about the cheese. She worked on recipes and we worked together to figure out how to get certified with the state. We’re starting really small, about 30 pounds of cheese per batch. We’re not making a profit, but if we can cover costs and get our name out there, then we’ll figure out what to do next.”

The initial Grazing Plains cheeses have been cheddar curds, that don’t have to be aged, and the first specialty cheese, Tilsit, which has a particular connection to both Jason’s and Miriam’s backgrounds.

“As a math major, I take part in the annual math alumni breakfast,” Miriam says. “Mark Jantzen ’85 was at one of these, and he said, ‘I hear you’re starting to make cheese – you have to learn about this cheese.’ There was a town in East Prussia called Tilsit. There were Mennonites who lived in the area, although there’s no evidence they were making this cheese.

“From a cheesemaker perspective, it feels like these Mennonites who came from the Netherlands to East Prussia could have brought some [of this kind of cheese]. But cheese is a product of its environment – it doesn’t turn out the same in another place. Mark had also had this in Germany.

“So it’s a cheese named after the town that is no longer called that. I think it’s now part of Russia, close to Poland. I had to do all kinds of research to get the recipe. I finally found a video of a cheesemaker in Australia, watched it several times, and got the recipe.”

“Miriam and I are both from this Mennonite lineage,” Jason says. “We thought it would be great to have a cheese that fits our story.”

Prairy Market and Mojo’s at Bethel carry the cheese curds, and Prairy the Tilsit, but Jason has sold most of it at the Wichita Old Town Farmers’ Market.

Both Jason and Miriam will say that growing up on a farm in close touch with the natural world has shaped where they are choosing to go in life. And so did their Bethel education.

“Both majors taught me particular ways to think,” Miriam says. “The nuance of the liberal arts – I got to take Mennonite history, Greek, and gen ed requirements like chemistry, that has been helpful in farming and cheese-making.

Bethel [made me see] the need to think critically and [gave me] the tools to do it, to not just take things at face value but to ask why they are the way they are. That pushed me to caring about soil and about the people who are metaphorically downstream.

“Social justice is a foundational background ethic that I took away from my years in the peace and justice program,” Jason says. “Liberal arts in general, being exposed to interdisciplinary classes and professors who pushed critical thinking – that’s all still pretty important, allowing me to think outside the box and maybe getting me into the mess I’m in now of not wanting to follow the conventional model.

“In farming, you have to know a little bit about a lot of things. That’s what liberal arts is about, and it gets you a long way in life.”

This story is from:
Around the Green - Winter 2019
by Bethel College