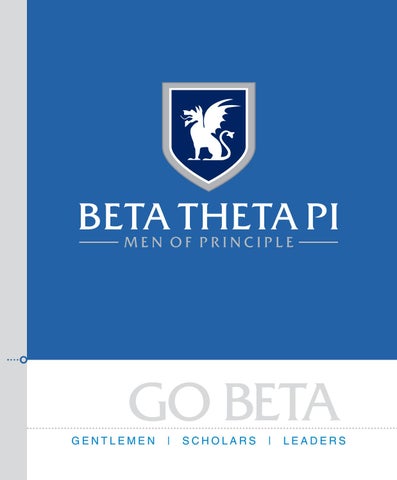 I believe in the power of the mind, cultivating my own intellect and the minds of others. I respect leadership, lead when called upon to do so and help to prepare the leaders who will come after me. I willingly lend my talents and abilities to the service of my community. I recognize and respect the worth of each person, refusing to take part in activities that undermine the dignity of others or myself. I choose to act responsibly, weighing the consequences of my actions on those around me. I speak honestly and listen actively. I seek the company of other men of principle, extending them the bonds of brotherhood. I build bridges, not walls. I am a Beta.

I AM A MAN OF PRINCIPLE

I am a man of principle.

Dear Potential Member, You are on the threshold of a decision to pledge Beta Theta Pi which will change your life as an undergraduate and provide a lifetime of loyal friends and career opportunities. I have been active for several years as international spokesman for Beta Theta Piâ&#x20AC;&#x2122;s Men of Principle initiative. As a long-time public servant, I know the value of cultivating an abundance of new leaders who are men of character and men with energy levels to succeed in business, public life, the clergy and the military â&#x20AC;&#x201D; in other words, men who will create the future. Beta Theta Pi does not tolerate alcohol abuse, drug use or hazing. We do believe in finding outstanding men on each college campus who practice academic excellence, display reverence in telling the truth, exhibit leadership potential and possess the selfless qualities which bind men together in solid brotherhood of sharing joy and sorrow, together. I have championed the merit of a strong fraternity and sorority system because I believe it enhances the quality of undergraduate social and leadership building exercises. I have been proud of my membership in Beta Theta Pi because I was inspired during four great years at Denison University with Beta brothers who have meant so much to me for more than a half-century. I hope you will consider, carefully, the unparalleled opportunity and the challenge that this moment presents in your life. I look forward to supporting your highest aspirations now and in years to come.

“A teacher is never too smart to learn from his pupils.” — Bill Bowerman, Oregon ’33 Co-founder, Nike

WHO DO YOU WANT TO BE?

Social scientists argue that we become who we surround ourselves with. Additionally, they argue that one’s college years are perhaps the most developmental of all. Right now, you have an opportunity to decide who to surround yourself with: men who, every day, strive to be of value to their community, develop their minds and forge lasting relationships that transcend the college experience.

To develop men of principle for a principled life.

To build lasting bonds of friendship and brotherhood, Beta calls for:

MUTUAL ASSISTANCE Betas believe that men are mutually obligated to help others in the honorable labors and aspirations of life. Intellectual Growth Betas are devoted to continually cultivating their minds, including high standards of academic achievement. Trust Betas develop absolute faith and confidence in one another by being true to themselves and others. Responsible Conduct Betas choose to act responsibly, weighing the consequences of their actions on themselves and those around them. Integrity Betas preserve their character by doing what is morally right and demanding the same from their brothers.

A PLACE FOR LEADERS

A great college experience goes beyond the classroom — it teaches real life. That’s why the Beta Theta Pi Foundation has completed two $20 million capital campaigns to support the development of leadership and life skills in its members. With award-winning leadership programs for its undergraduates to meet and learn from fellow Betas throughout North America, Betas gain real experience that pays off after graduation.

Keystone Regional Leadership Conference A high quality three-day experience focusing on chapter officer development, principled leadership and volunteer training. Although Beta has other popular values-based leadership programs, this is the first that teaches operational concepts to chapter officers and advisors.

Miller Nichols Chapter Presidents Leadership Academy Three days of intense discussion, leadership training and goal setting, which is hosted at the Fraternityâ&#x20AC;&#x2122;s founding site with all chapter and colony presidents in attendance.

“My company’s employee handbook consists of one thing and one thing only: use your best judgment at all times.”

A ROLL OF HONOR

The Beta tradition has produced some of North America’s most outstanding men. Guided by the values of the Fraternity and the brotherhood that pushes a Beta to achieve more than he could alone, the rolls of Beta Theta Pi include astronauts, statesmen, military heroes, artists, journalists, athletes, musicians, actors, educators, physicians, philanthropists and a multitude of Fortune 500 CEOs, just to name a few.

BETAS OF ACHIEVEMENT Heralded as one of North America’s great old college fraternities, Beta Theta Pi is long in experience and certainly not short in its list of member achievements. Known today as “The Leadership Fraternity,” Beta’s list of alumni who have gone on to achieve extraordinary professional and personal success is both inspiring and reinforcing to those who call Beta Theta Pi their own.

 200+ members of the U.S. Senate and House of Representatives – more than any other fraternity – including two Speakers of the House

 Justice of the Supreme Court of Canada

 85 Rhodes Scholars – more than any other fraternity

“Be more concerned with your character than your reputation, because your character is what you really are, while your reputation is merely what others think you are.” John Wooden, Purdue ’32 Nicknamed the “Wizard of Westwood,” he won 10 NCAA basketball championships in a 12-year period — seven in a row — as head coach at UCLA, an unprecedented feat. Within this period, his teams won a record 88 consecutive games. He was named national coach of the year six times.