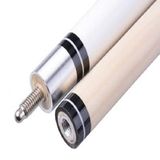 Are you aware that your game is greatly influenced by the kind of "cue"? It's not strange to see a very good player losing game simply because of switching to different cue. It's also not a surprise to see some players conscientiously using the same old cue rather than buying a new one. If you play billiards or pool, you obviously know the value of your good cue.