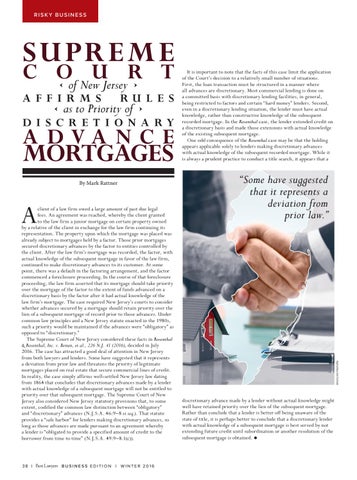 as to Priority of

client of a law firm owed a large amount of past due legal fees. An agreement was reached, whereby the client granted to the law firm a junior mortgage on certain property owned by a relative of the client in exchange for the law firm continuing its representation. The property upon which the mortgage was placed was already subject to mortgages held by a factor. Those prior mortgages secured discretionary advances by the factor to entities controlled by the client. After the law firm’s mortgage was recorded, the factor, with actual knowledge of the subsequent mortgage in favor of the law firm, continued to make discretionary advances to its customer. At some point, there was a default in the factoring arrangement, and the factor commenced a foreclosure proceeding. In the course of that foreclosure proceeding, the law firm asserted that its mortgage should take priority over the mortgage of the factor to the extent of funds advanced on a discretionary basis by the factor after it had actual knowledge of the law firm’s mortgage. The case required New Jersey’s courts to consider whether advances secured by a mortgage should retain priority over the lien of a subsequent mortgage of record prior to those advances. Under common law principles and a New Jersey statute enacted in the 1980s, such a priority would be maintained if the advances were “obligatory” as opposed to “discretionary.” The Supreme Court of New Jersey considered these facts in Rosenthal & Rosenthal, Inc. v. Benun, et al., 226 N.J. 41 (2016), decided in July 2016. The case has attracted a good deal of attention in New Jersey from both lawyers and lenders. Some have suggested that it represents a deviation from prior law and threatens the priority of legitimate mortgages placed on real estate that secure commercial lines of credit. In reality, the case simply affirms well-settled New Jersey law dating from 1864 that concludes that discretionary advances made by a lender with actual knowledge of a subsequent mortgage will not be entitled to priority over that subsequent mortgage. The Supreme Court of New Jersey also considered New Jersey statutory provisions that, to some extent, codified the common law distinction between “obligatory” and “discretionary” advances (N.J.S.A. 46:9–8 et seq.). That statute provides a “safe harbor” for lenders making discretionary advances, so long as those advances are made pursuant to an agreement whereby a lender is “obligated to provide a specified amount of credit to the borrower from time to time” (N.J.S.A. 49:9–8.1(c)).

It is important to note that the facts of this case limit the application of the Court’s decision to a relatively small number of situations. First, the loan transaction must be structured in a manner where all advances are discretionary. Most commercial lending is done on a committed basis with discretionary lending facilities, in general, being restricted to factors and certain “hard money” lenders. Second, even in a discretionary lending situation, the lender must have actual knowledge, rather than constructive knowledge of the subsequent recorded mortgage. In the Rosenthal case, the lender extended credit on a discretionary basis and made those extensions with actual knowledge of the existing subsequent mortgage. One odd consequence of the Rosenthal case may be that the holding appears applicable solely to lenders making discretionary advances with actual knowledge of the subsequent recorded mortgage. While it is always a prudent practice to conduct a title search, it appears that a

“Some have suggested that it represents a deviation from prior law.”