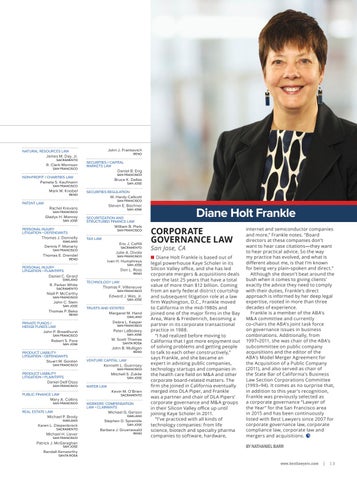 Diane Holt Frankle is based out of legal powerhouse Kaye Scholer in its Silicon Valley office, and she has led corporate mergers & acquisitions deals over the last 25 years that have a total value of more than $12 billion. Coming from an early federal district courtship and subsequent litigation role at a law firm Washington, D.C., Frankle moved to California in the mid-1980s and joined one of the major firms in the Bay Area, Ware & Freidenrich, becoming a partner in its corporate transactional practice in 1988. “I had realized before moving to California that I got more enjoyment out of solving problems and getting people to talk to each other constructively,” says Frankle, and she became an expert in advising public companies, technology startups and companies in the health care field on M&A and other corporate board-related matters. The firm she joined in California eventually merged into DLA Piper, and Frankle was a partner and chair of DLA Pipers’ corporate governance and M&A groups in their Silicon Valley office up until joining Kaye Scholer in 2011. “I’ve practiced with all kinds of technology companies: from life science, biotech and specialty pharma companies to software, hardware,

internet and semiconductor companies and more,” Frankle notes. “Board directors at these companies don’t want to hear case citations—they want to hear practical advice. So the way my practice has evolved, and what is different about me, is that I’m known for being very plain-spoken and direct.” Although she doesn’t beat around the bush when it comes to giving clients’ exactly the advice they need to comply with their duties, Frankle’s direct approach is informed by her deep legal expertise, rooted in more than three decades of experience. Frankle is a member of the ABA’s M&A committee and currently co-chairs the ABA’s joint task force on governance issues in business combinations. Additionally, from 1997–2011, she was chair of the ABA’s subcommittee on public company acquisitions and the editor of the ABA’s Model Merger Agreement for the Acquisition of a Public Company (2011), and also served as chair of the State Bar of California’s Business Law Section Corporations Committee (1993–94). It comes as no surprise that, in addition to this year’s recognition, Frankle was previously selected as a corporate governance “Lawyer of the Year” for the San Francisco area in 2015 and has been continuously listed with Best Lawyers since 2007 for corporate governance law, corporate compliance law, corporate law and mergers and acquisitions.